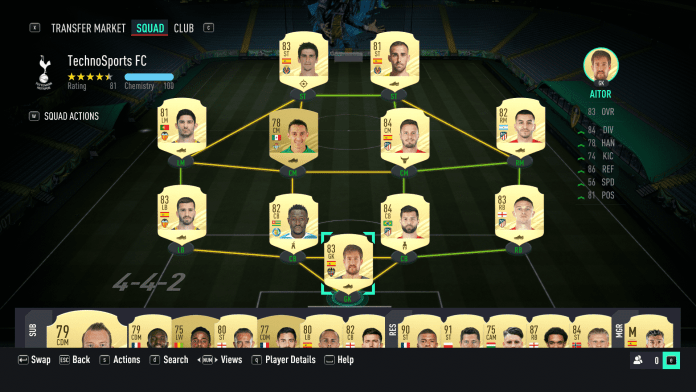 This is why we will be making FUT starter teams for various price ranges (as in FIFA coins) be it for LaLiga, Premier League or more. Here we will give you a tip to making your LaLiga starting XI in and under 30k coins for FIFA 21:

The Getafe center back is a great option at just 2500 coins and his pace along with defensive skills makes him value buy. I have played with the guy and is best for his standing tackles and good slides, however, he is good on stopping counter attacks as well.

The integral part of Simeone in real life is a good player in FIFA 21 as well because you can get him for just 5000 coins. His excellent defensive awareness and physical strength make him spot-on inside the penalty box, can make amazing sliding tackles as well.

The defensive right-back who can run fast and has enough potential to tackle wingers from getting into your penalty box is Trippier. You can get him for as low as 3000 coins and at that price he is a value buy and syncs well with Felipe on the right hand side.

The Valencia winger could be a great option out on the wings with his amazing pace and decent shooting along with dribbling capabilities. He links up well with Gaya on the left-hand side and you can get him for just 1500 coins.

Canales is more kind of an attacking midfielder available for around 2500-3000 coins but an excellent guy to make runs or shoot. A great dribbler with the ball and can make pinpoint throughs and passes, perfect to dominate the midfield and set up the attack.

A great attacking threat on the right hand side with amazing pace and dribbling, he can easily cut in the opponent’s penalty box or put a pin-point cross to help you score against your opponent. You can get the Argentine for just 3000 coins.

For breaking into your opponent’s defensive line you need a good attacking threat and so you can get one for just 2500 coins in the form of Gerard Moreno. He is lethal in front of goal, so do let him score via the last shot and he will not disappoint you and he is good at dribbling past the defenders as well.

You can get the striker for just 1000 coins but at that price he is a pretty handy option paired with Moreno. Alcacer could be used to make runs and give throughs to Moreno, else he his good at shooting to and can curve shots from long range as well.

So this completes our 30k coins LaLiga starter team for FIFA 21 and in the coming days, we will be bringing more such content. For any queries or suggestions, feel free to comment on this article…😊