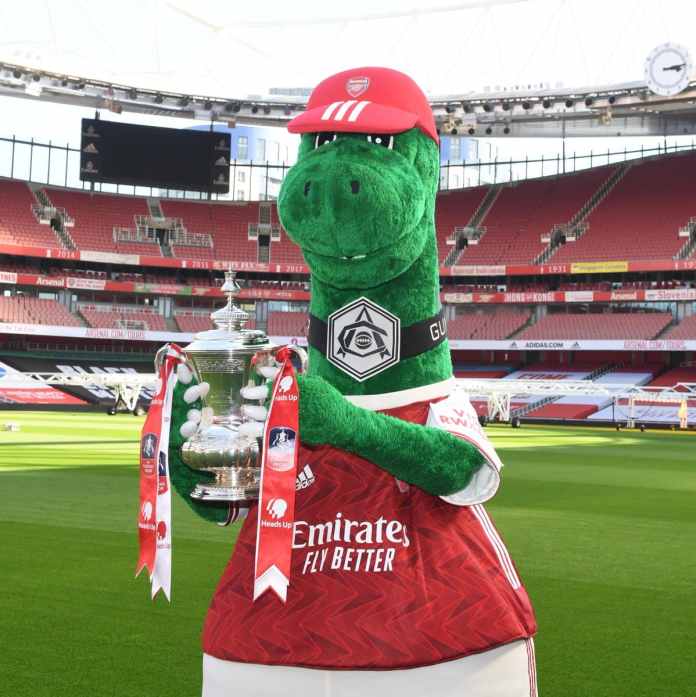 2020 has been the year of many saddening departures, it is with heavy hearts that Arsenal fans are having to say goodbye to their mascot, Gunnersaurus after 27 long years of service.

Having witnessed their highest of highs as the Invincibles during the early 2000s, Gunnersaurus goes down as one of the most iconic mascots that the Premier League has had the chance to watch.

The reason behind the departure is rather sad in itself. Due to the finances of the North London club being heavily affected due to the COVID-19 pandemic, they have been downsizing the non-playing staff in an attempt to reduce the money spent in running the club.

Owing to that very purpose, Jerry Quy, the man who has played the mascot for the better part of 2 and a half decades has now been relieved of his services. The club already discontinued the services of over 50 employees in the month of August.

Gunnersaurus became the latest to join the list, with his services to the club being discontinued with the end of the summer transfer window of 2020.

It has been five months since football resumed following the break caused due  COVID-19 pandemic. In those five months, there have not been any fans allowed to watch a Premier League game due to the risk of the virus spreading.

Sadly, it looks like the majority, if not the entirety of the 20/21 season will be played behind closed doors. Clubs all around the world have been paying extra attention to where their money has been spent this summer, and with nobody in the stands to entertain, Gunnersaurus’ purpose is over for the time being.

Having played the character since its introduction in 1993, Jerry Quy will no longer wear the Gunnersaurus costume anymore. However, hope has appeared in the form of Mesut Ozil who has offered to pay the mascot’s wages so that he can continue.