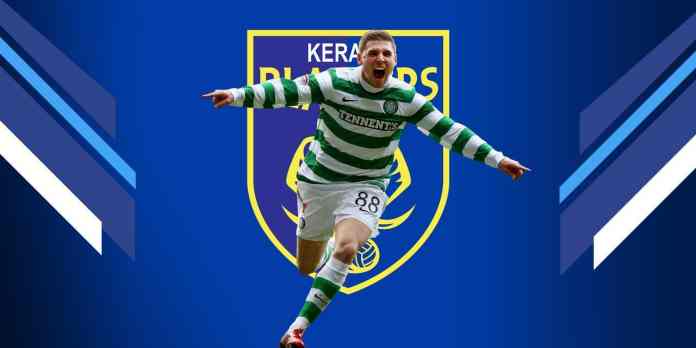 The transfers of all the ISL clubs are already heated up as all the clubs want to make their team better and clinch the title this season. Now it is the turn of Kerala Blasters FC to sign a foreigner.

English forward Gary Hooper has signed for the Kerala Blasters FC and will represent the yellow jersey in this year’s ISL.

The English forward will replace the all-time top scorer of Kerala Blasters FC Bartholomew Ogbeche who has joined Mumbai City FC this season.

Hooper started his youth career for Tottenham Hotspur. In 2002 he left Spurs. He made his senior debut for Grays Athletic in 2003. From 2010 to 2013 he played for Celtic. In 2013 he joined Norwich City and played in the Premier League with Norwich City. Last season he played for Wellington Phoenix. In his 572 senior appearances, he has scored 235 goals.

Kerala Blasters FC confirmed the signing of Gary Hooper in their social media handle. Karolis Skinkys, sporting director of Kerala Blasters FC said, “Gary (Hooper) has a natural killer instinct on the field and can score some unbelievable goals. I’m positive that our fans will soon come to love Gary for his high-level goalscoring quality. I’m very happy to have a player of such caliber join the team and look forward to working with him for our upcoming season.”

The forward is too excited to start his journey in India. He said, “I am really looking forward to the next chapter in my career with Kerala Blasters. I hope my experience can help the team and I can score important goals to help us challenge the ISL title. Can’t wait to meet my team-mates and start training for the new season.”

Gary will join with the squad in Goa in their training camp. He is a very experienced forward. It will eventually help the whole team to do perform better this season.