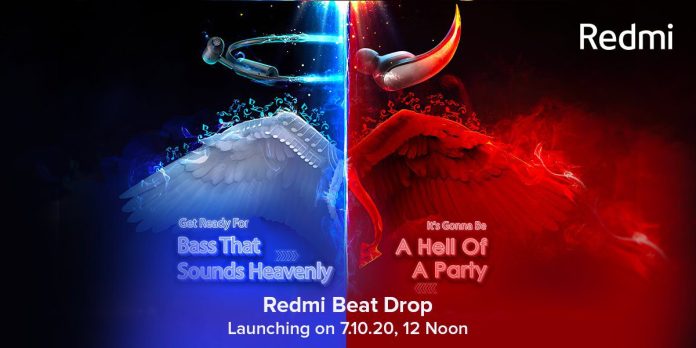 Xiaomi’s sub-brand Redmi debuted in the Audio segment a few months ago with Earbuds S in the country and then later on it introduced the budget-oriented Redmi Earphones and is all set to launch two more audio products in India on October 7.

Redmi India shared a teaser image on the microblogging platform Twitter confirming the launch event for the launch of two audio products which are supposed to be earphones on October 7th at 12:30 PM.

Redmi is using the hashtag #RedmiBeatDrop to market the products and even made a dedicated webpage for the launch event which lists some of the key highlights of both the products.

It can be concluded that Redmi is launching wireless in-ear headphones with a neckband design very much like OnePlus Bullets Wireless Z while the second product is expected to be a TWS earphone which could be the recently announced Redmi AirDots 2 which has been launched in China for 79 Yuan.

Redmi is teasing wireless in-ear headphones with “Bass That Sounds Heavenly” and is teasing some features as clear sound, the option to pair with another pair of earphones, sweat resistance, inbuilt volume controls, and Bluetooth 5.0 which is teased with “Get a High-Five connection”.

Another product teased is TWS earphones which Xiaomi says that “It’s Gonna Be Hell Of A Party”. Redmi claims that it will be lightweight and will be offering 3X battery life than other TWS earphones in the segment and you can also access the voice assistant of your choice through the earbuds.

There is currently no idea about what models these exactly are or what price they’d be launched at but we expect to be launch in a lower budget segment since Redmi is known to cater to the ultra-budget market in the country. We expect Xiaomi and Redmi to tease more about these products in the coming days.