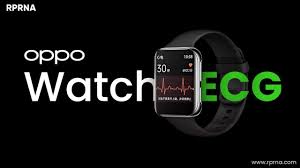 After receiving the approval from the relevant agencies of the various countries, Oppo has finally launched the Oppo Watch ECG version, globally in the 2020 OPPO Developer Conference. This watch has been made by technology, that can make an ECG of the user, Oppo had to take those approvals from various countries.

As this watch has been launched officially so we have got a lot of authentic specifications of this newly launched Watch. So let’s check out all these specifications.

The watch features in new units of first-gen wearable 46mm case. This watch also features a flexible AMOLED display and is powered by the Snapdragon Wear 3100 (Snapdragon Wear 2500 for the Chinese version) and a low-power chip called the Apollo 3, paired with 1GB of RAM and 8GB of storage.

According to the OEM, the Watch can take its new measurements in real-time by a simple button shortcut and also can detect common heart anomalies like atrial fibrillation.

The OPPO Watch ECG Edition has more conventional heart-rate monitoring, as well as it also can vibrate to alert the user to these conditions. The OEM also claimed that this new watch is leveling up to ‘medical-grade’ due to its new ECG specification.

According to the post on Weibo, the device has been certified as a class II medical device by the National Food and Drug Administration. This watch has also got approval from the US FDA.

Regarding the other specifications of this watch, the users will also get the facility of 2.4GHz Wi-Fi, Bluetooth 4.2, GPS, and NFC. Regarding the power-backup, this phone comes with a 430mAH battery supported by a VOOC Flash Charge. After wearing this watch, the user can easily check his/her ECG. This device senses the pulse rate and gives almost accurate ECG of the user.

Regarding the pricing, the stainless steel version of the watch has a price tag of ¥2499 (~$367). The watch is also attached to its maker’s partnership with League of Legends. The watch also has another special edition with this battle royale title as its theme.