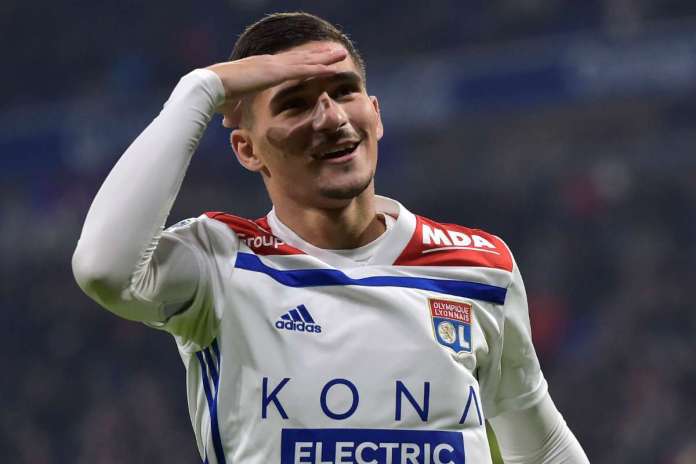 Houssem Aouar to Arsenal has been a transfer rumour for some time now. After concrete links with Man City and Juventus, it is now highly probable that Mikel Arteta has convinced the 22-year old French midfielder to join Arsenal. It is believed that agreeing personal terms with the player will not be an issue. With a 5-year contract and substantial wages increase on what he currently earns at Lyon, Aouar joining might seem only like a matter of time. But however, the bottleneck in the process seems to be the valuation difference. While Lyon want closer to €60 million, Arsenal are not prepared to pay that much. However, they have made a formal €35 million bid at the moment.

Aouar has been coveted by some of the top clubs for some time now. And for good reason as well. Despite only 22, he has made around 100 appearances for the club so far. A midfielder adept in defence and attack, Aouar ticks most of the boxes for an all-rounder in the middle of the park. As per Whoscored, he made 1.1 tackles and 0.5 interceptions per game in Ligue 1 last season. Offensively, he created 1.8 chances per game and made 1.4 key passes per game. As far as attacking contributions goes, on an average, he has managed to score around 5 goals and provide 6 assists per season.

The other option in midfield for Arsenal is Atletico Madrid’s Thomas Partey. But protected by a €50 million release clause, the London club is looking for other ways to pay up the money demanded. It remains to be seen who they choose between these two options. But should they go forward with Houssem Aouar, it would definitely be a top signing from the Gunners and yet another good player will be seen featuring frequently in the Premier League.

It has been a long time since India played competitive international cricket, but that wait is set to end - against a...
Read more
Football

There is ongoing speculation about the future of Manchester City manager Pep Guardiola. As it stands, the Catalan head coach is out...
Read more

Manchester United are ready to welcome fans into Old Trafford

Football without fans can never be fulfilled. But because of the COVID-19 pandemic, it was not possible to allow anyone into the...
Read more
Football

From being excellent one week to being shambolic the next, Leicester City are proving themselves to be one of the most unpredictable...
Read more
Football

While rivals Chelsea have included retired former goalkeeper Petr Cech in their 25-man squad for the Premier League, Arsenal have left out...
Read more

The Cupertino giant has been making iPhone for almost over a decade now and finally it seems the company has reached the...
Read more
Google

There are two latest smartphones from Google in the market: Google Pixel 5 and the Google Pixel 4a. Both of them are...
Read more
smartphone

The Red team has made some bold announcements yesterday with its new RX 6000 series graphics cards based on the RDNA 2...
Read more
Apple

As per the reports, Apple is in the works to make its own search engine that will replace Google. As per...
Read more
Load more

Matchday 2 of the Champions League played out over the course of the last two days, and the group tables have started...
Read more

Top 5 17-year-olds to score in the Champions League

Promising teenagers happen to be one of the most exciting parts of being a football fan. Signs of greatness can emerge from...
Read more

Match 49 of the Indian Premier League (IPL) 2020 will feature a fun matchup as Kolkata Knight Riders will take on the...
Read more