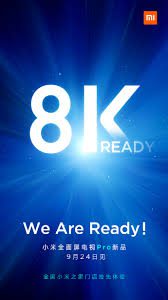 In a previous article we have claimed that Xiaomi is expected to launch a new Mi TV Master with 8K resolution, now unsurprisingly to prove this assumption true the Digital Chat Station has revealed about the arrival of this upcoming TV, with a trading name of ‘Xiaomi Extreme Commemorative Edition’.

The TV will be launched on 28th September in China. Although the company has not yet shared any details of this upcoming TV they have released a promo poster of this upcoming device, revealing that the TV features 8K of high resolution and will support through a 5G as well.

According to Digital Chat Station, Xiaomi will also be providing a soundbar with this upcoming TV. But there are no further information is reported from the company officials, although the source has claimed that there is a ‘five-digit price’ at the bottom of the TV.

The development of this upcoming TV was shared on the Chinese microblogging website Weibo revealing the fact that the TV will use Mini-LED Technology. We are expecting that, this upcoming TV will become the successor of the previously launched Mi TV Master 65-inches 4K OLED in China.

Xiaomi has also claimed that this upcoming TV will set a benchmark for ultra-high-ends TVs for the next five years. It is expected that the TV will have a higher refresh rate than 60Hz, HDMI 2.1 ports, slim bezels, and many more high-end specifications.