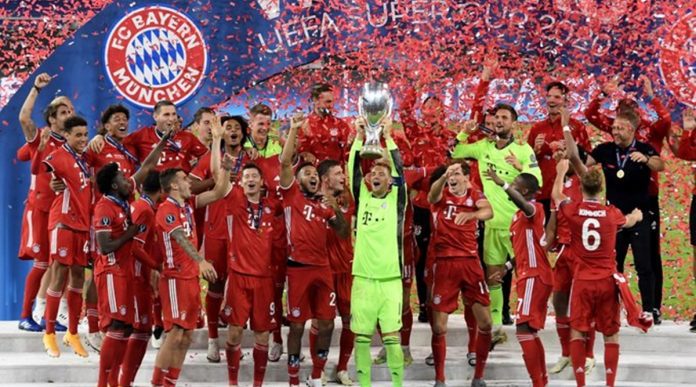 The 2020 UEFA Super Cup between Bayern Munich and Sevilla started out as a fast, physical contest. 10 minutes into the game Rakitic was fouled by David Alaba in the box and won a penalty for Sevilla.

Lucas Ocampos took the spot-kick and converted from 12 yards out, sending Neuer in the wrong direction. The cheekiest part of it was the little no-look stunt that Ocampos pulled off while beating one of the world’s best goalkeepers.

The first half brought about a lot of chances for the Champions League winners. But the resolute partnership of Diego Carlos and Jules Kounde kept the Bavarians at bay.

Goretzka equalized in the 33rd minute following a lobbed ball into the box by Muller, set up for a shot by Lewandowski.

Lewandowski almost gave Bayern the lead in the 49th minute after finishing a teasing 1-2 with Muller following a brilliantly lobbed ball by Sane.

However, the goal was ruled out for offside. Lewandowski’s foot was just behind the line when Sane picked the forward out deep in the opposition box.

Youssef En-Nesyri almost won the match in the 86th minute in a one-on-one with Neuer. However, the German’s heroics kept Bayern in the game.

Despite chances aplenty for both sides, it finished 1-1 at the end of regulation time.

Diego Carlos gave away a cheap corner following an intervention. It would prove to be vital as Javi Martinez scored a rebound header to give Bayern the lead.

Sevilla had a great chance to equalise right off the bat. However, Ocampos’ volley could not find the back of the net.

The final whistle blew after an epic battle between the two European champions. Bayern won the evenly contested match 2-1 after extra time.