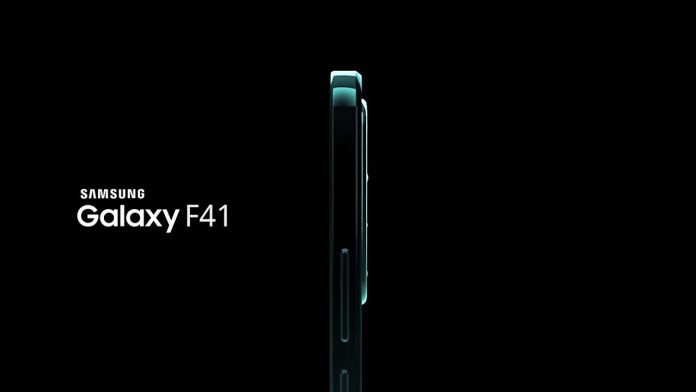 The Galaxy F41 comes with Full HD+ sAMOLED infinity U-display. The size of this display is still unknown, but we are expecting that the phone sports 6-inches display- just like every other smartphone in 2020.

According to the Google Play Console, Samsung will be going back to its favorite chipset- Exynos 9611 and the SoC will be equipped with 6GB RAM. But we haven’t got any information regarding its internal storage capacity. The phone will run on Android 10

This upcoming phone will be backed by a decent battery of 6,000 mAh- just like several M series devices. But the supportive charging speed is not known to yet. The phone also has a USB Type-C port for charging.

Regarding the camera part, the phone will have a rectangular camera module with a triple rear camera setup, which includes 64 megapixels of the main sensor alongside an ultrawide lens and another unknown sensor. We are expecting that the unknown sensor may be a telephoto sensor. On the front side, the phone features a teardrop notch cutout to hold a selfie camera, but the selfie camera sensor is still unknown.

The device is confirmed to have a rear fingerprint sensor. We are assuming that the phone may have dual stereo speakers. No more further information is still not reported. We will surely get to know everything about this phone on October 8.