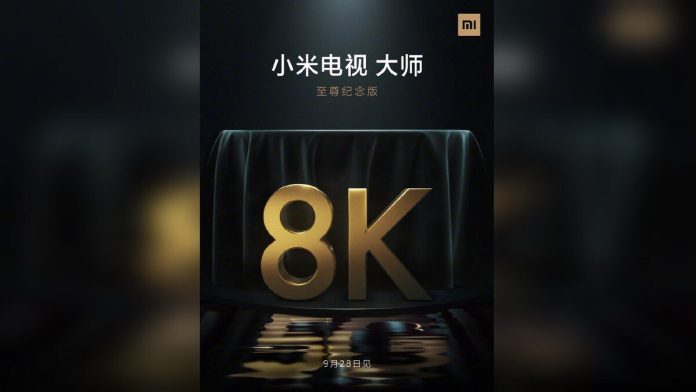 Xiaomi is going to launch a new Mi TV Master ‘Supreme Commemorative Edition’ (translated). The TV will be launched on 28th September in China. The company has not shared details of this upcoming TV but they have released a promo poster of this upcoming device, revealing that the TV features 8K resolutions and 5G connectivity.

The development of this upcoming TV was sheared on the Chinese microblogging website Weibo revealing the fact that the TV will use Mini-LED Technology. We are expecting that, this upcoming TV will become the successor of the previously launched Mi TV Master 65-inches 4K OLED in China, but that has not made its way to India till now.

According to a Weibo post by one of the Xiaomi’s accounts, the Mi TV Master ‘Supreme Commemorative Edition’ will be surfaced in China on the 28th of September. The promo poster also reveals that the TV will feature 8K of high resolution and will support through a 5G as well.

As per the Weibo promo poster, this upcoming TV will come with Mini-LED Technology that provides improved contrast ratio and deeper blacks compared to normal LED panels that are lit with regular LEDs, but the Mini-LEDs are not smaller than regular LEDs. This upcoming TV is also featured flat display technology.

Xiaomi is also claimed that this upcoming TV will set a benchmark for ultra-high-ends TVs for the next five years. It is expected that the TV will have a higher refresh rate than 60Hz, HDMI 2.1 ports, slim bezels, and may more high-end specifications.

As of now, this is all the information that the company has provided, but we have to wait for next week to know more important specifications of this upcoming premium Smart TV.