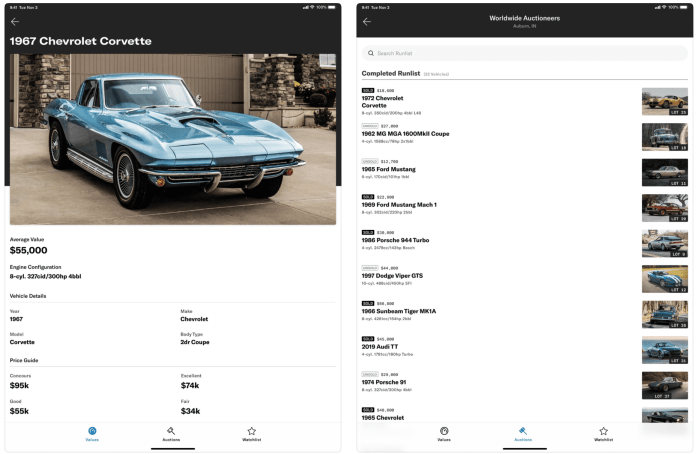 TRAVERSE CITY, Mich., (SEPTEMBER 24, 2020) – Hagerty has launched the second generation of its mobile app in iOS and Android, empowering automotive enthusiasts to research the value of nearly any collector car in the palm of their hand. Pricing is drawn from Hagerty’s industry-leading database, which includes more than 10 years of valuation information on more than 40,000 cars, trucks, vans, and motorcycles from the turn of the 20th century to the present. In addition, Hagerty’s app includes real-time auction tracking as well as results from past auctions, providing collector-car enthusiasts a wealth of information with which to inform their next purchase or fuel their daydreams.

Hagerty’s developers built the second-generation app with Google’s Flutter open-source UI software development toolkit, which improves the mobile app development process by combining the quality of native apps with the flexibility of cross-platform development in both iOS and Android applications. In addition, Flutter allows developers to build desktop, embedded, mobile and web apps from the same codebase.

“We’re excited that Hagerty is joining an expanding roster of companies including Alibaba, MGM Resorts, and eBay that are using Flutter as an ideal solution for cross-platform app development,” says Tim Sneath, Google’s Group Product Manager for Flutter and Dart. “Given its ability to design beautiful native apps in record time and ultimately provide a premium mobile experience, Flutter is the perfect framework for the development of the Hagerty Insider app.”

Flutter plays a key role in Hagerty’s digital transformation, with emerging technologies providing a unique experience for both app developers and consumers. “We’ve taken a new approach to mobile app development with Flutter,” says Kelly Smith, Hagerty’s Chief Strategy Officer. “We’re giving our people the right tools to build the best digital products, providing an optimized experience for both user and developer.” Users can download the app in the iOS or Android app stores now.