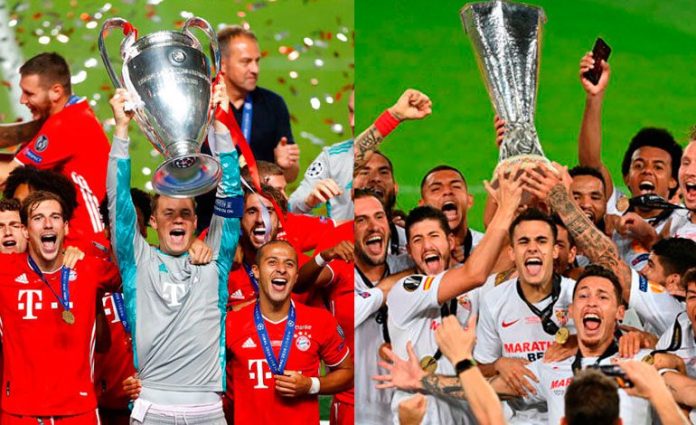 The match will be a huge test for football as one-third capacity of the stadium will be open for the fans. Each club has been allowed 3000 overseas fans.

As a safety precaution, the body temperature of each fan entering the stadium will be checked. Any person whose temperature is over 37.8 celsius will not be allowed inside the stadium.

For the overseas fans, they will have to present their ticket and a coronavirus test report which states negative result. The test should have been conducted in the last three days and these people will not be allowed to stay for more than 72 hours in the country.

Bayern Munich has started this campaign right from where they have left last season. In the season opener, they have cruised to an 8-0 victory against Schalke. Sevilla has also been in great form but containing the Bayern attack will be a huge task for Julen Lopetegui’s team.

When is the Bayern Munich vs Sevilla UEFA Super Cup match?

The UEFA Super Cup match between Bayern Munich and Sevilla will be played on 24th September 2020.

The match will be played at Puskas Arena, Budapest, Hungary.

Which TV channels will broadcast the UEFA Suer Cup match live in India?

Sony Sports is the exclusive media broadcasting partner of the UEFA Super Cup match in the Indian sub-continent. You can watch the match live in India on Sony Ten channels.

You can catch the live streaming of the Bayern Munich vs Sevilla UEFA Super Cup match in India on Sony Liv.

Have Leeds Secured the Services of the Next Ronaldinho?

When reports emerged that Raphinha would be joining Leeds United after a last-minute deal at the end of the transfer window, Rennes...
Read more
Football

Lionel Messi has already become a legend of the game and one of the greatest players to ever play the game.
Read more
Reviews

boAt Rockerz 560 Bluetooth Headset review: Is it worth the buy?

Predicting the WINNERS of the Champions League 2020-21 season

It has only been 58 days since the 19/20 edition of the Champions League reached its conclusion. Today, we find ourselves awaiting...
Read more
Football

While the transfer window might have shut down on Monday, there is still room for clubs to sign new players in the...
Read more
Football

After a rather dormant summer transfer window, Bayern have suddenly sprung to life, concluding as many as four deals in the last...
Read more
Football

The Brazilian winger has been frozen out at Juventus. Last season he only scored 1 goal and provided 5 assists in 23...
Read more

Following Petr Cech's registration in Chelsea's 25-man Premier League squad, one can only hope it does not come to him donning the...
Read more