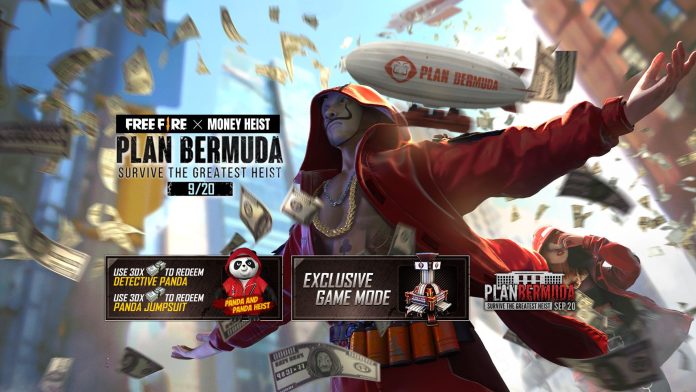 After PUBG getting banned in India, Garena Free Fire is trying to its fullest to capture the PUBG market by giving many offers in less money, and recently it introduced Hritik Roshan aka Jai, as a playable character. Now, Garena has made a collaboration with the digital streaming giant Netflix to bring Money Heist’s “Professor” and his crew to the game.

In Free Fire, tons of contents have been added recently by Garena, a Singapore based company. One of the new content is the introduction of the “Free Fire x Money Heist” event. This event started on September 13, and it will end today. A massive in-game heist took place on September 20, named “Peak Day”.

The official press release of the event stated “Maxim was detained by the police during the heist, and is now counting on his partners to get him out. Free Fire players all around the world have been tasked by The Professor to retrieve and secure Maxim while retrieving the stolen money.”

The developers also added the “Money Heist” game mode to the game under this event. This game mode is a special crossover that brought  2 teams of 4 players each head-to-head to print a specific amount of cash in the stipulated time. The game mode kicked off on September 20 and will remain till today.

The publishers also released two mini web series clips on YouTube – “Plan Bermuda is Underway” and “Plan Bermuda Chapter 2“, which shows how the “Professor” from recruited the Garena characters from the game for the most major heist. There was also a third and the final episode released on September 19.

A funny live-action comedy mini-movie was released on YouTube in Hindi by the publisher. Garena also flew a giant “Professor” blimp across the sky of Mexico City and collaborated with local street artists of Argentina, Brazil, and Mexico to cover walls and buildings with “Free Fire x Money Heist”-themed artwork.

Less than an hour left, if you haven’t experience the new mode try it now before it gets down. If you are a new player then download it from Google Play or Apple Store.

Free Fire is featuring Hritik Roshan as an In-Game Character

After PUBG mobile getting banned in India, some of the similar games are trying to capture the huge market left behind it....
Read more
Gaming

PUBG Mobile alternatives that you should try now in India

The IT Ministry of India banned 118 mobile applications including the mobile version of the famous battle royale game named PUBG. I...
Read more

nCORE Games just conformed that the most awaited action game from their side - Fearless and United Guards i.e. FAU-G, in short,...
Read more
Load more

nCORE Games just conformed that the most awaited action game from their side - Fearless and United Guards i.e. FAU-G, in short,...
Read more

Could playing FIFA really be good for our health? Researchers at The University of Leeds investigated what really goes on inside...
Read more

Cricket is one sport that is religiously followed in India. Irrespective of the boundaries set by caste, culture, background, and the religion...
Read more