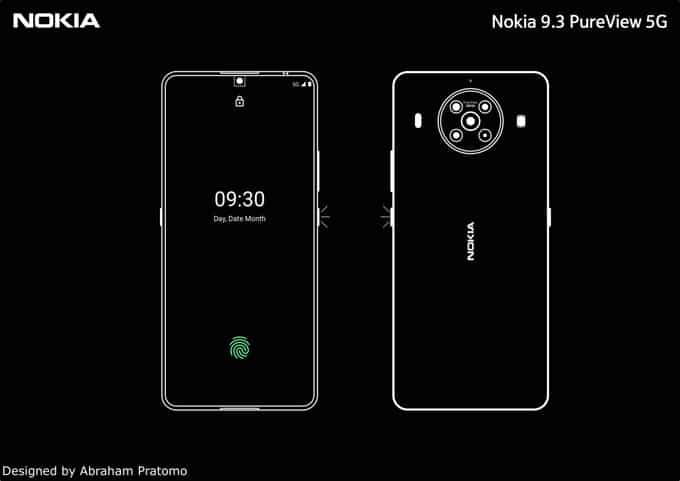 Nokia is expected to add another flagship smartphone in its ‘.3’ series with a trading name ‘Nokia 9.3’. The launch date of this phone is still not disclosed, but this flagship phone is expected to be unveiled in Q4 2020. Nokia Anew has shared some details of this upcoming phone. So. let’s check those details.

According to the Nokia Anew, this upcoming flagship phone will be fairly compact and may have a slight chin, bezels will be symmetrical. The overall design of this upcoming phone will be following the rest of the announced devices. However, the phone is said to come with a round-shaped camera rear camera module surrounded by 4 cameras. The phone also has a LED flash on the backside.

Regarding the display of this phone, this phone may have a 5.99″ display which is the same as the Nokia 9 PureView, however, the phone had sizeable bezels, that have increased its footprint considerably. This upcoming phone could very well be one of the smaller premium phones of this year. But, we haven’t got any other information regarding the display.

Regarding the other specifications, the phone will come with an under-display fingerprint sensor. According to Nokia Anew, the smartphone prototypes were being developed in black, blue, green, and copper, but we are not confirmed that what gradient we will be seeing when the phone becomes ready for launch.

No other information on this phone is not known yet. But it is predicted that the phone will be surfaced soon. So, interested people have to wait for this flagship smartphone until the phone will launch.

In the era of extraordinary smartphones and flip-phones, Nokia never disappoints its users with its crazy feature phones. Like if anyone wants...
Read more
News

Nokia gets a contract to set up the 4G network on the moon. This is one of the several contracts NASA is...
Read more
Technology

The smartphone giant already stepped into the Smart TV market with its only 4K TV this year and now, having tasted success...
Read more
News

This year, thanks to the global pandemic caused by the COVID-19, people have shifted to work from home culture rather than working...
Read more
Load more