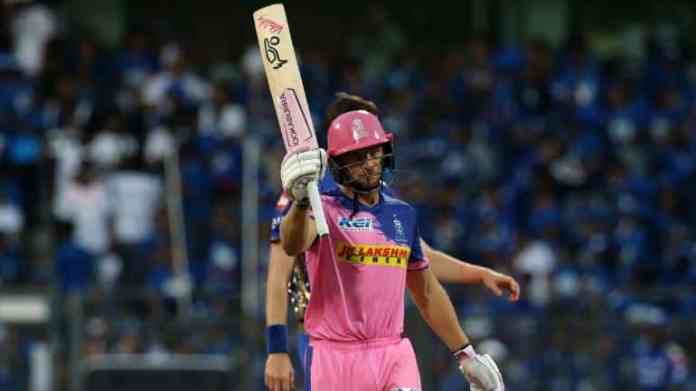 IPL 2020 has started and the Rajasthan Royals get a big blow as one of the most important players in the team Jos Buttler is going to miss his first match against Chennai Super Kings on Tuesday as he is serving a mandatory quarantine having arrived in the UAE with his family.

It is a hard truth, but regarding the current COVID-19 situation, safety is the first thing. Every player has to serve his mandatory quarantine period to be available in the match. But for Buttler, the situation is slightly different. The Board of Control for Cricket in India (BCCI) has confirmed to reduce the quarantine period to 36 hours as England and Australian players had travelled from one bio-secure bubble in the UK to another in the UAE. But Jos Buttler had travelled separately. That’s why he will have to undergo the six-day quarantine period.

In the recent T20I series against Australia, Jos Buttler served his nation for two matches and bagged 44 and 77 runs which helped England to seal the series. He is such an important player for RR. Let’s see from which match he will be available for his team.

Not only Jos Buttler but also Rajasthan Royals are very much worried about the most valuable all-rounder Ben Stokes. Because he hasn’t provided any update about joining his team in the IPL 2020. The English all-rounder Ben stokes missed the majority of English summer as he wanted to be with his family in New Zealand. Tomorrow is the first match of Rajasthan Royals and Ben Stokes is yet to join the team in UAE, which is not a good sign for the Royals.

As per the reports, Xiaomi is in the working to bring a foldable slider smartphone, named as the Xiaomi Mi Mix 4....
Read more
Samsung

Samsung has mad an announcement of its Galaxy Z Fold 2 in the previous month. That time, some rumors were in the...
Read more

The blockbuster weekend will end with an equally fun match as table-toppers Mumbai Indians will take on the Rajasthan Royals.
Read more
Cricket

Match 40 of the Indian Premier League (IPL) 2020 will feature a heated match as Rajasthan Royals will take on Sunrisers Hyderabad....
Read more
Cricket

Match 37 of the Indian Premier League (IPL) will definitely help you get rid of those Monday blues as Chennai Super Kings...
Read more
Cricket

The Super Saturday will kick off with an interesting Royal derby as Rajasthan Royals will take on the Royal Challengers Bangalore.
Read more