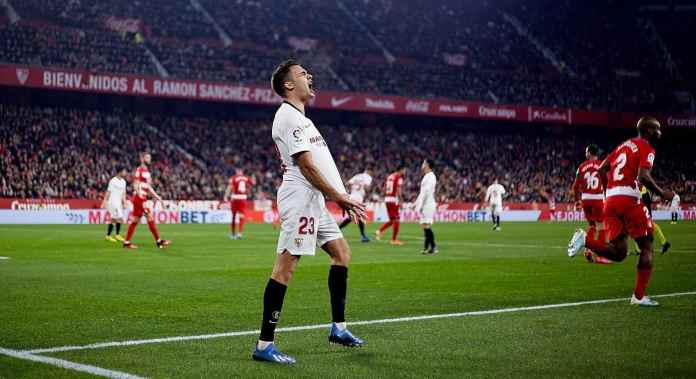 The Spanish left-back who had played a major role in Lopetegui’s squad to win the UEFA Europa League last season has returned to his parent club Real Madrid. But it seems the French boss isn’t too convinced with his performance despite being voted La Liga’s best left-back last season.

Sevilla are not interested to sign Reguilon back despite his stellar performances last season. They have already signed Marcos Acuna from Sporting.

Premier League Manchester United was keen to secure Reguilon’s services but they don’t want to pay Real Madrid’s €30m price tag for the left-back. On top of that, Real Madrid are also asking for ‘buy-back and pre-emption clause’.

Now, a sudden turn has come up. Tottenham Hotspur has entered the race for the left-back. They have agreed to pay €30m (including add ons). Moreover, Tottenham has also accepted both clauses asked by Real: ‘buy back clause’ [around €40/45m] and ‘pre-emption clause’ [if any club will made a bid for Reguilon on next years, Tottenham must call Real Madrid and they can match the bid].

Tottenham has also agreed on personal terms with Reguilon. He will sign a five-year contract until June 2025. He was ready to join Manchester United but Tottenham has convinced him and he is now happy to be a part of the Tottenham project.

Real Madrid head coach Zidane prefers his €47m signing Ferland Mendy and Marcelo is going to stay at least another year. He intends not to use the 23-year-old Spanish talent who is even preferred by Luis Enrique for the national team.

Although Zidane doesn’t have Reguilon in his plan for this season, Madrid wants to make sure to include a buy-back and pre-emption clause so that they can bring their homegrown player back to the Bernabeu if he manages to establish himself as a world-class player.

The official announcement will be made soon regarding the Tottenham-Reguilon transfer deal. Tottenham are also interested in their former player Gareth Bale.

Real Madrid is held as the pinnacle of club football. Los Blancos have won the Champions League a world-high 13 times. Throughout...
Read more