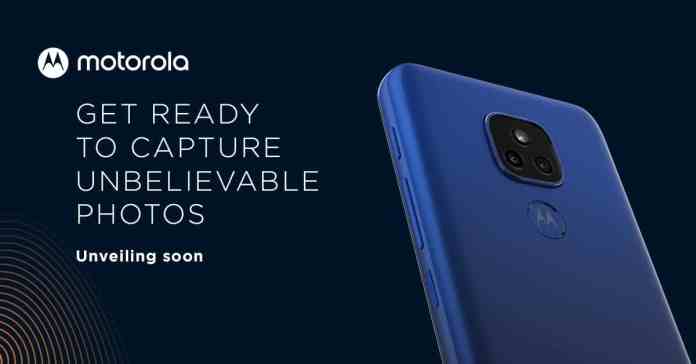 Next, we can witness the fingerprint scanner of this phone, which is rear-mounted. the scanner is just slightly below the rear camera module. The company also added a line in that poster: “GET READY TO CAPTURE UNBELIEVABLE PHOTOS”. But the thing is, in this era of smartphones, every newcomer comes with at least a triple rear camera setup. So, it is quite interesting that what the Motorola will put in those dual cameras to make it a camera-centric smartphone. As of now, we can see only one color variant of this phone which is blue (expected in a matte finish).

That’s all we can breakdown from the teaser poster Motorola has shared. Apart from it, no other information about this upcoming smartphone has been shared by Motorola. We just hope, in the upcoming days, we’ll come to know more about this newcomer.

There is a piece of news which just came out from Realme, confirming that the company will launch its Smart SLED 4K...
Read more
Mobile Accessories

In recent times, the global market of Smartphones is increasing day by day so as its accessories. The more advanced smartphones, the...
Read more
smartphone

According to some of the recent reports, an upcoming smartphone from Motorola has received the TUV Rheinland certification. As of now,...
Read more

Motorola E7 Plus launched in India at INR 9,499

Finally, the wait is over as Motorola has launched another lower mid-range smartphone in the Indian market, named as Motorola E7...
Read more
Load more

After completing his move to the direct rival of Barcelona in the La Liga, Uruguayan striker Luis Suarez claimed he is proud...
Read more
Realme

There is a piece of news which just came out from Realme, confirming that the company will launch its Smart SLED 4K...
Read more
News

Spotify has signed a multi-year contract with Chernin Entertainment to develop some movies and television series based on some original audio content.
Read more
Football

The third matchday of the Premier League is in the books, and there has hardly been a dull moment.
Read more
Football

After negotiating a joint venture with Shree Cements as their main sponsors, East Bengal are set to make their highly anticipated debut...
Read more
Load more