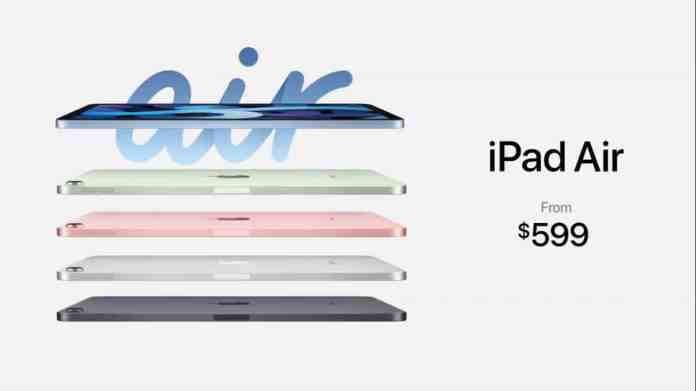 Today is the day for Apple’s September event which the company named this year “Time Flies”. Lots of new announcements have done regarding the Apple Watch Series 6, Apple watch SE, Apple Fitness+, iPad 8th Gen, A12 Bionic SoC, the new iPad Air, and lastly the A14 Bionic.

In this year, 2020, Apple completed 10 years when they 1st shipped its 1st iPad. So, it’s obvious, today’s announcement regarding iPads should be a bit special. Till now, the company sold more than 500 million iPads around the globe, and surprisingly 53% of the users are new to this device. To maintain these stats or even push it further Apple announced the improved new iPad 8th Gen and iPad Air. To get the details of the new iPad 8th gen click here. Or if you are excited about the iPad Air, here are the details.

Apple introduced the new iPad Air today aiming to serve the Pro features to its customers at an affordable price tag. Now, leave the intro and jump into the feature details directly.

Just like the earlier Air model, this one also equipped with a 10.9″ liquid retina display having a resolution of 2360×1640. On top of it, the advanced display technologies like Full lamination, P3 wide color, True Tone technology, and Antireflective coating enhance the entire viewing experience.

Apple, this time integrated a next-generation touch ID at the top button of the iPad Air. The proactive sensing ability of it makes the authentication job faster no matter where it needed – while logging to some app, at the time of payment, and more.

Hope you already get, from the blog title, what is powering this new iPad Air. Yes, it’s none other than the new A14 Bionic SoC. Let you know, A14 Bionic is the industry’s first 5nm process technology. For the implementation of this technology, Apple is able to pack 11.8 billion transistors in this SoC which is a 40% hike in number than the earlier. And what they with these extra transistors? Well, these are applied to new features along with increasing overall performance.

The ultimate outcome of this A14 Bionic is 40% faster in case of CPU performance and 30% faster to deliver graphics performance. It can handle all kinds of media work at higher resolution or quality with no difficulty. There is a lot more to explain.

No matter what you want to do for your entertainment purpose – drive into the musical world, become a part of your favorite game, or play with photos, the new iPad Air 4 is well capable of handling all these. Thanks to the new A14 Bionic chip.

There is an application named djay Pro AI that actually makes all the musical surgeries possible in the iPad Air. It brings all the tools of a professional DJ to the iPad.

In the case of gaming, you will get a console-level graphics experience into the iPad Air. On the other hand, a 6vs6 multiplayer game is playable at constant 60fps, visual effects like shadows, and other details are more enhanced to make every scene more realistic.

In the case of photo editing, the users will get some higher level of experience too.

Nothing to say more regarding this. We all are aware of the fast data transfer speed and all through the USB C port.

Apple added a 7MP FaceTime HD camera in the front which has an f/2.2 aperture, smart HDR support, video capture ability at 1080p 60fps, and can perform better in low lighting. In the rear end, there is the same camera of the iPad Pro with f/1.8 aperture, 4K 60fps video recording capability, and improved video stabilization.

Stereo speakers added to the two sides of the iPad Air 4 so that you can enjoy your favorite shows or music with no compromise.

The iPad Air has the usual LTE support which is 60% faster and equipped with the latest Wi-Fi 6.

Apple is providing five color options in total, apart from the usual White and Black there are Rose Gold, Green, and Blue shades. The pricing starts from $599 only and will be available from next month.

The production of both iPad 8th Gen and iPad Air 4 leaves minimal impact on the environment. These two are made up of 100% recycled aluminum enclosure, the wood fibers used in the packaging are recycled or comes from responsibly managed forests.