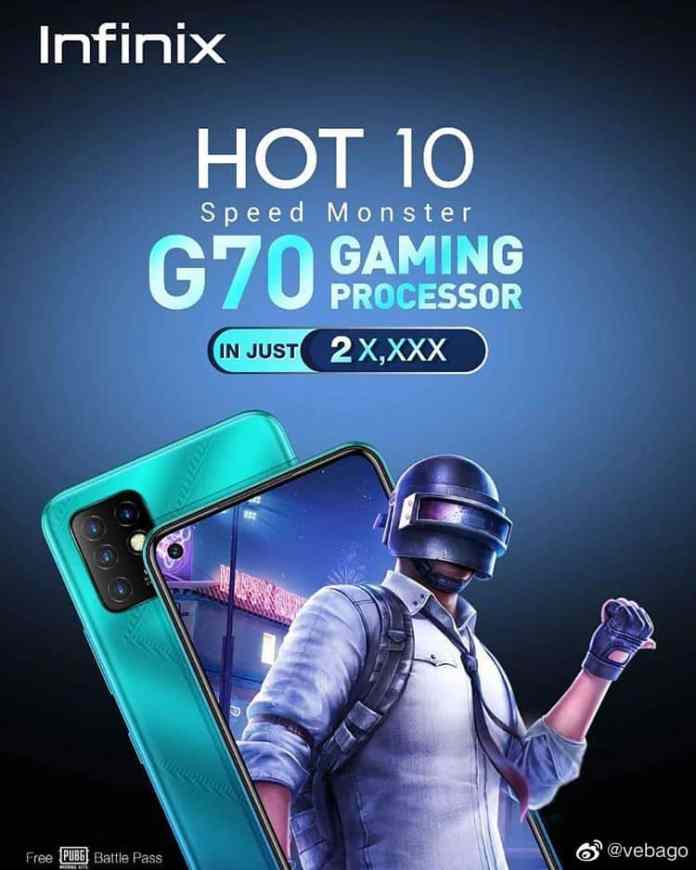 The leaked promotional poster of that phone has been spotted on the Chinese microblogging website Weibo for the very first time. From the poster, we can assume the front and back look of the phone. At the front, it will feature a single punch-hole selfie camera at the top left side of the display and on the backside, this phone will have a rectangular camera module setup, which will house a quadruple rear camera setup and an LED flash.

The power button and the volume rocker are on the right side of the device and the SIM tray will be on the left side (expected). Looking at the poster, it is quite tough to assume what kind of fingerprint scanner the phone will feature. But we can assume that the Infinix Hot 10 will feature a rear-mounted fingerprint scanner.

Now coming to the OS part. This phone is expected to run on the Android 10 OS and will be powered by an octa-core MediaTek Helio G70 processor (as per the leaked promotional poster). There is no leaked or confirmed news about the RAM and the internal storage variants of the phone.

Regarding the pricing, there is no confirmed information about this. In that poster, we can see that the price of the device is mentioned, but since there is no currency symbol, we cannot really say for sure as to what country it will launch in. If we assume the price like >Rs.20,000, there is a pretty less possibility of it being China or India, as it won’t justify the processor in that price range.

Now that’s all about the information we’ve got from the leaked promotional poster. We will get to know more about this phone in the upcoming days for sure.