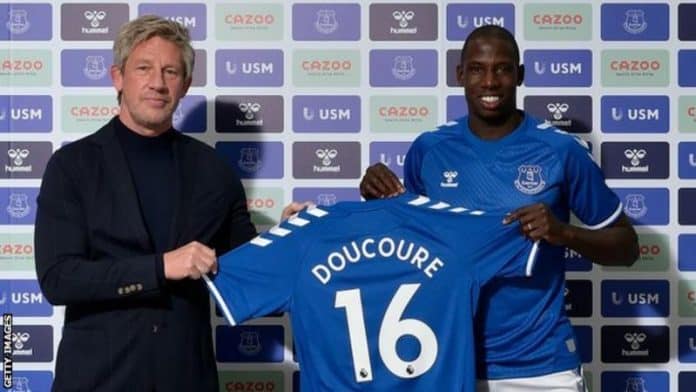 Everton has managed to sign Abdoulaye Doucoure from Watford on a deal worth up to 23 million pounds. This move comes as a quickfire signing, having already signed Allan from Napoli and James Rodriguez from Real Madrid for a combined 55 million pounds. Ahead of the 2020/21 season, Carlo Ancelotti has certainly attained a dream midfield trio and has been backed well by the Everton board. Of course with such investment, comes the need to fulfill high scale objectives, and now qualifying for the Europa League will be on the cards for the blue side of Merseyside.

The three signings are signed with the intention of playing particularly defined roles. As part of Carlo’s desired 4-2-3-1 formation, Doucoure and Allan would look to form a double pivot in the middle of the park and stop counters. While Allan would mostly sit back and look to intercept and recycle possession, Doucoure would play the box-to-box midfielder role by dropping back in defense time and again as well as surging forward to help with the attacks.

Meanwhile, James will look to play the centerpiece #10 role as an attacking midfielder, who will be responsible for set-piece execution and visioning passes in tight spaces. Additionally, if this trilateral partnership does not work, they could bring in the likes of Sigurdson and Gomes to take the initiative and create something.

Everton might have completed most of their signings in the market this summer, because the attack and midfield now look stacked with options. The signing of youth player Niels Nkounkou from Marseille will look to provide cover for Lucas Digne while loanee return Jonjoe Kenny will look to provide competition to captain Coleman at right back. They might however be looking at a backup winger who can come off the bench and make some impact. Regardless, Everton now look like a menacing side who will now prove to be a handful to all their rivals.