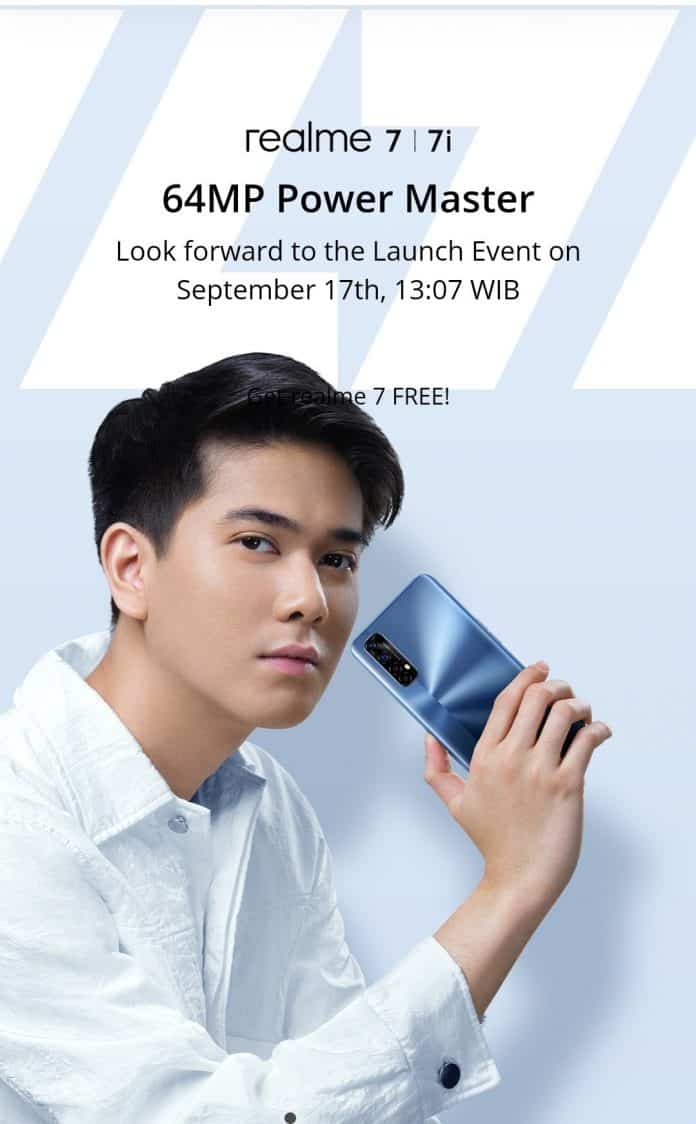 Realme is going to launch its two new mid-ranger Realme 7 and Realme 7i in Indonesia on September 17. Realme 7 specifications have already out in the market and the specs of the Realme 7i have also leaked ahead of the launch. Now let’s go for the specifications of those smartphones. The launch will be telecasted live on Realme Indonesia’s official social media accounts at 13:07 WIB.

Realme 7 (RMX2151) has a 6.5-inch FHD+ IPS LCD display with a refresh rate of 90Hz. Screen resolution is 1,080 x 2,400 pixels with 20:9 aspect ratio. There are two color variants of this phone. They are mist blue and mist white. This phone has a side-mounted fingerprint sensor.

The Realme 7 will be powered by an octa-core MediaTek G95 processor and runs on Android 10 Os with the support of Realme UI v1.0. This phone has two different RAM variants of 6GB/64GB and 8GB/128GB. The internal storage can be expanded by an external microSD card up to 256GB. This phone supports nano dual SIM but does not support 5G connectivity.

Regarding its rear camera specifications, this phone has a Primary Camera of 64 mp (f/1.8), the ultra-wide-angle camera of 12-megapixel, 5 mp macro, and 2 mp depth sensor with the support of an LED flash. Coming to its front camera, this phone has a 16 mp (f/2.1) selfie shooter in the front. The front camera is a punch-hole type.

The Realme 7 has a Li-ion type battery having a capacity of 5,000 mAH, which supports fast charging, comes with a 30 watt super dart charger. Realme claims that this phone will charge 50% in just 26 minutes. USB Type-C is supported by this phone. It supports Bluetooth 5.0 version, 4G VOLTE, and wifi. This phone has a dimension of 75.4mmx162.3mmx9.4mm and it weighs 196.5 grams.

Realme 7 will retail starting at Rs.14,999 for the 6GB + 64GB model. This phone’s 8GB + 128GB models will retail at Rs. 16,999. The first sale is scheduled for September 10 at 12 noon. Like other Realme smartphones, the phone will also be offered via Flipkart, Realme.com, and offline stores.

Specifications of Realme 7i

The Realme 7i will run on Android 10 OS and will be powered by the Snapdragon 662 processor (11nm) up to 2.0GHz. Regarding the display, this phone will have a 6.5-inch full HD+ (1600 x 720) single punch-hole display with a refresh rate of 90Hz. This phone will feature a rear fingerprint scanner. According to the leaks, this phone will come with only one variant of 8GB RAM and 128GB internal storage, that is expandable by an external microSD card.

The Realme 7i will feature a decent battery backup of 5,000mAH, supported by 18W fast charging. Seeing all the specifications, it is quite sure that the Realme 7i will be a liter version of the Realme 7. Regarding the pricing, nothing is confirmed right now.