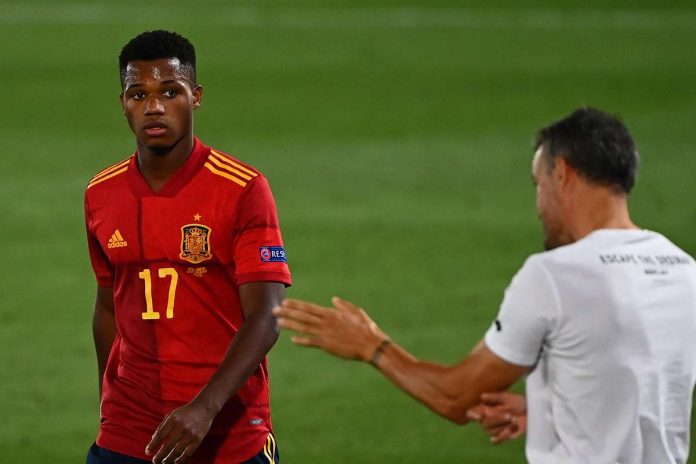 Barcelona wonderkid Ansu Fati was handed his full senior debut by Luis Enrique against Ukraine on Sunday. The 17-year old winger has once again created magic on the football field.

Fati earned a penalty for Spain and later scored the team’s third goal with a stunning strike.

The records created by Ansu Fati so far:

Ansu Fati has scored his first senior goal for Spain on his first-ever start for the national team. The boy is doing wonders at just 17 years old. He is breaking almost all the records as the youngest player ever.

At only 17 years and 311 days old, Ansu Fati has just scored for Spain on his full senior debut. 🤯

What were you doing at 17? pic.twitter.com/TcwPLi3xlF

Fati, just at 17 years, has taken to senior-level professional football like a duck to water. He has generated a lot of hype during last season when he starred for Barcelona and was creating records after records.

Now, in the UEFA Nations League, Enrique handed him a chance and the boy has made everyone proud. He is definitely a star in making! Barcelona may well have their own heir for Lionel Messi.