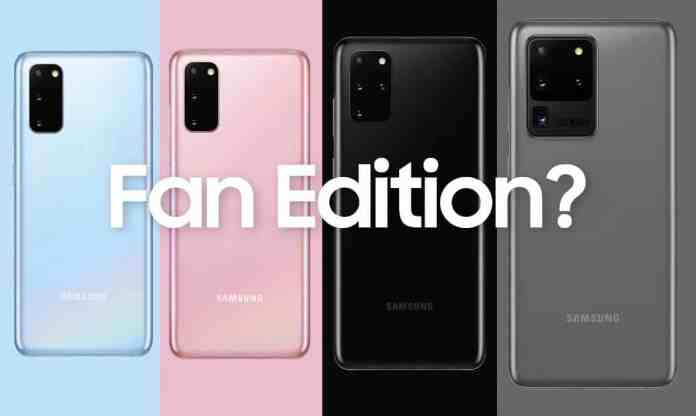 From the past couple of months, there had been a lot of leaks and news about the Samsung Galaxy S20 Fan Edition. Recently, there is a major leak we’ve got from WinFuture.de revealing all the specifications of that phone. Let’s check out all of those specifications and variants of this upcoming phone from Samsung.

It is confirmed by the company that, the Samsung Galaxy S20 Fan Edition will be available in two variants of processor configurations. One of them will be a 4G supported Exynos 990 trim, while the other one will be 5G capable Snapdragon 865 powerful processor. The European market is expected to get both versions of this phone.

Apart from this, every other specification will be the same in the two versions. Regarding the display, this phone will have a 6.5-inches Super AMOLED panel (2400 x 1080 pixels) with a refresh rate of 120Hz protected by the Corning Gorilla Glass 3. This phone will be available in only a 6GB RAM variant and 128GB UFS 3.1 storage. The Samsung Galaxy S20 will come in six different color variants in the market. Those are lavender, navy, orange, red, sky green, and white.

Regarding the camera specifications, this phone has a triple rear camera module on its back. The rear camera will have a 12MP wide lens with OIS, paired with a 12MP ultrawide sensor and an 8MP telephoto module with 3X Optical Zoom which also boasts OIS. This phone is capable to record video at up to 4K resolution. In terms of the front camera, this phone has a 32MP selfie shooter in a hole-punch design.

The Galaxy S20 Fan Edition has an in-display fingerprint sensor. The power button and the volume rocker will be on the right side of the body and the USB-C port is placed at the bottom. This phone will be powered by one of the two types of processors as previously said (the Snapdragon 865 SoC or the Exynos 990 chipset). This phone will have a decent battery of 4,500mAH with the support of 15W fast charging. There is IP68 protection and also Wireless Powershare facility available in this phone.

The Galaxy S20 Fan Edition is rumored to have a price range of around £580 in the UK or $760 in the US, both of which are lower than the S20, as expected. This phone is expected to launch soon either at the end of this month or the start of October.

Finally, the wait is over. So many rumors, so many leaks were out in the market regarding the fan edition of...
Read more

For the past few days, we have reported about the arrival of the Samsung Galaxy S20 Fan Edition. Surprisingly, we have got...
Read more
Load more