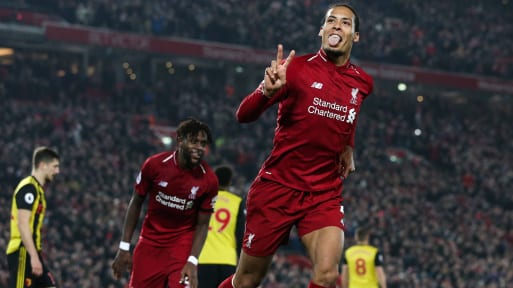 The nominees of the Professional Footballer’s Association Award for Player of the Year have been announced! In this post, we’ll rank all the nominees by their chances of winning the coveted award.

With the exception of Kevin De Bruyne, the list is almost entirely Liverpool players. Raheem Sterling has come a long way since his Liverpool days, adding an end product to his runs. This season, he racked up 25 goals and 5 assists in all domestic competitions. However, the reason he misses out on the award completely is due to this.

Well, not completely. While he has been a tad bit inconsistent in his performances, he still has his prime years ahead of him. In the years to come, Raheem Sterling is going to be one of the best attackers in the world. But this year, his competition is simply too good.

This one might come off as a shocker, but Virgil Van Dijk is nowhere close to the award this year. Yes, he’s still the best center half in the world but the 20/21 season did expose the Dutch International’s flaws a lot more. While Van Dijk is one of the pillars of Liverpool’s successful title-winning campaign, he has looked human at the back at times. In the sense that he too, can make into the Player of the Year.

While he has been essential to Liverpool going forward, setting up 13 goals in the Premier League his defensive output does need some working on, but again, he is only 21.

The Football Writer’s Association Player of the Year Award winner of this season, Liverpool captain Jordan Henderson kicks off the top three on this list. His stats don’t do justice to his game on the pitch, but his contribution to his team goes beyond the glamour of goals and assists.

One could say that his importance to the team was shown by his absence during Liverpool’s clash against Atletico Madrid, and during his spell of injuries this season. He is the leader of the team, and is the binding force that ties the Premier League champions together. His charisma on and off the pitch is of vital importance to the team, as has become evident this season.

When your manager tells the media that you’re a complete forward, you are one of the best in the game. Sadio Mane has enjoyed one of, if not the most productive campaigns of his entire career. Mane has been the most vital attacker in Jurgen Klopp’s side, and has also been the most consistent going forward this season.

If you’ve ever strolled into the comments section of a post that has a debate going on about the Player of the Year, the only thing that you will come across is fans screaming for De Bruyne to get what he deserves.

With 13 goals and 20 assists, matching Thierry Henry’s record for most assists in the Premier League, the Belgian International has proven to the world that he is the best midfielder in the world. He supplies quality and quantity to the chances he creates, and takes spectacular ones himself.

Of the six nominees, our prediction is for Kevin De Bruyne to win the award this season for his amazing individual performances throughout the season. What is your opinion? Do let us know in the comments down below…

Top 10 Most Valuable Footballers in 2021

Will sporting agents become less valuable in the future?