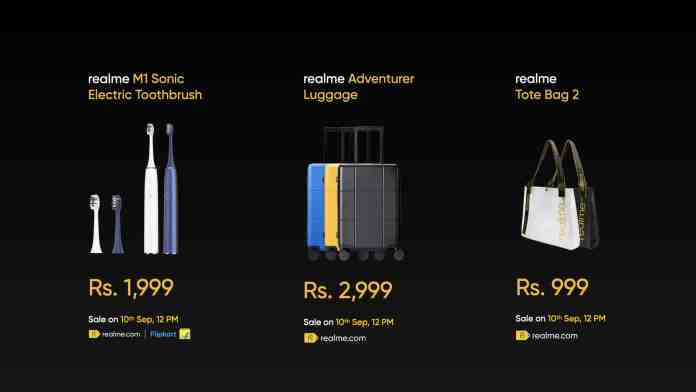 Everyone’s confused about Realme’s product lineup and its as messed up as your Mathematics textbook just a bunch of random numbers and alphabets coming from here and there and this around Realme picked number 7 and launched two phones around it Realme 7 and 7 Pro which are upgrades to six-month-old Realme 6 series which even got a new smartphone the Realme 6i maybe it would have been an imaginary smartphone.

But Realme is also foraying into the lifestyle segment just like its other Chinese counterparts and has also launched a bunch of new products to Carter the Indian consumer.

The first in the list is Realme M1 Electric Toothbrush has an 800mAH battery that offers up to 90-days of battery life and has an IPX7 water resistance along with fast charging. The M1 has four modes of brushing clean, soft, white, and polish. It will be available for INR 1,999 starting from September 10.

The M1 is equipped with Dupont bristles that have 99.99 percent antibacterial properties and have a blue indicator that eventually fades in color to tell us that its time to change it when it’s completely gone. Also, the brush head is just 3.5mm thin and is metal-free.

The second lifestyle product which got revealed today was a trolley suitcase which Realme is calling as Realme Adventurer Luggage which has a polycarbonate body and weighs 3.1Kgs. The suitcase will be available in blue, yellow, and black colour options starting at INR 2,999.

Last but not the least Realme also announced a Tote Bag which has quite a unique design and according to the company it is inspired by a planet’s orbit & the stars. The Tote Bag will be available for INR 999.

Another segment of the event was dedicated to smartphones and the same as our article. So here’s a quick glimpse at the specs of the newly launched Realme 7 duo.

The Realme 7 sports a 6.5″ FullHD+ LCD panel with a refresh rate of 90Hz and is the first smartphone to be powered by Mediatek’s latest Helio G95 in two configurations of 6GB/64GB and 8GB/128GB. It packs a 5000mAH battery that charges at 30W which can top-up the whole battery in 65 minutes. There’s a quad-camera setup at the back which consists of a 64MP sensor on the back while there’s a 16MP sensor in the front.

The base variant with 6GB/64GB will retail for INR14,999 while the higher storage variant with 8GB/128GB storage option will cost you INR16,999 from September 10 through Flipkart and Realme’s official online store.

The Realme 7 Pro is the dominant one of the duo and it sports a  6.4 FHD+ Super AMOLED display with a standard refresh rate of 60Hz. The 7 Pro is powered by the Snapdragon 720 which can be found on the last-gen Realme 6 Pro coupled with up to 8GB of RAM and 128GB of storage. The biggest update is the inclusion of 65W SuperDart charging which can charge 7 Pro’s 4,500 mAh completely in 34 minutes. Speaking of optics there is a total of five cameras in this phone, one in front and four at the back, a 64MP main sensor in the back along with three auxiliary lenses, and a 32MP selfie shooter.

The coronavirus pandemic has spared no one in the last few months and especially the economic growth of companies and even...
Read more
News

Xiaomi's ambitions for folding phone is nothing new as the company has already revealed its double folding phone back in 2019 and...
Read more

Thanks to the TENAA website, it has now confirmed that Realme is willing to add a new smartphone into its X series....
Read more

Realme is having a big day because Realme Narzo 20 series is being announced in India and the other side the Realme...
Read more
Load more