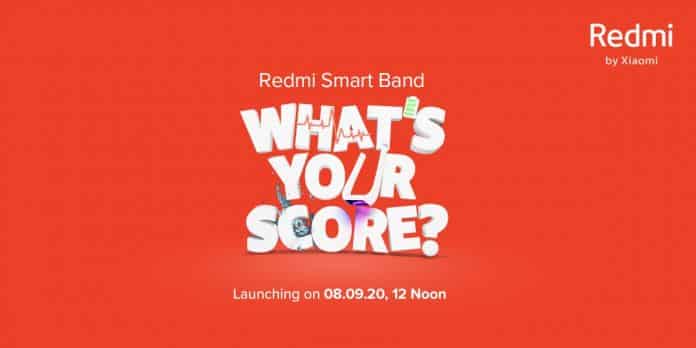 The Xiaomi backed Redmi is going to launch a new fitness band named “Redmi Smart Band” on this 8th September. The timing is scheduled at 12 noot on that day. Redmi India announced this on Tweeter and wrote, “Be a winner in everything you do!” That clearly indicates the Smart Band is coming with so many activities tracking modes. For the emojis given on the tweet, we can expect around 20 different sports modes.

Though the company didn’t mention the specs directly, on the image they mentioned a lot. If you observe the giant “WHAT’S YOUR SCORE?” writing the heart rate symbol is given first. Then a battery symbol for good battery life and water flow from ‘Y’ to ‘C’ mentioning the water resistance. The pricing details and variants are still in suspense.

Around a couple of hours back of this announcement, Redmi India also notified us regarding this saying “A new race starts today.” On that Tweet, it also wrote, “Life’s a game and we always score to WIN! Cause winners create history and so shall we.” It will not be surprising if through the band the individual user’s daily/weekly/monthly fitness score can be compared with others so that everyone can measure how fit s/he is.

Back in April, Xiaomi launched Redmi Band in China celebrating its 10th Anniversary. Our belief is this Redmi Band is now coming to India with the name of “Redmi Smart Band”. If so, here are the specs of the Redmi Band (China version).

It features a 1.08-inch color AMOLED touchscreen and promises up to 14 days of battery life like the Mi Band 4. Like the Realme Band, it also comes with a built-in charging port that plugs into a USB-A port on the charger, laptop, or PC, which is quite convenient than their traditional capsule-style band.

The band features a heart rate sensor, sleep monitoring and also comes with activity tracker which can track a lot of sport modes such as outdoor running, treadmills, walking, cycling, and others. You can even set sedentary alerts, reminders, and more because the software remains the same as Xiaomi’s Mi Band 4.

It has a 5ATM (50 meters) water resistance, similar to the Mi Band 4 which is surprising at its price point. You will find over 70 watch faces, which is great in fact, along with four colors (black, blue, olive, and red) for the strap.