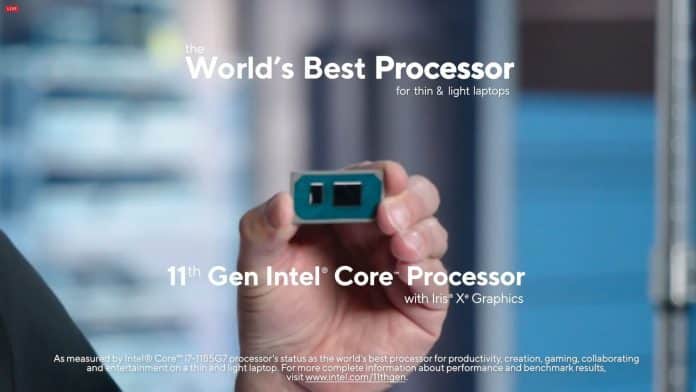 Finally, Intel has launched the Tiger Lake CPUs for the next-gen laptops, promising great performance along with efficiency over the last generation Ice Lake CPUs that were not at all convincing, considering their price tag. So, obviously, in 2020, the powerful and cost-saving AMD Ryzen 4000 APUs have stormed the market and finally, Intel’s new chips with new Intel Xe graphics can be compelling enough to attract a lot of people.

The new 11th generation Tiger Lake CPU lineup is still based out of 10nm process and use the SuperFin transistors for better performance and efficiency. Tiger Lake now offers a re-designed middle-level cache of 1.25 MB along with high clock speeds even at lower thermal envelope and now combined with Intel’s new Xe graphics, these CPUs are incredible in terms of value.

The complete SKU of the new Tiger Lake CPUs:

This is the specs of the new Tiger Lake UP3 CPUs that will draw 12 W of power and can turbo to 28 W, which was previously called the U series, and to make things simple Intel has changed the naming scheme a bit.

As we see, the flagship CPU of this lineup is obviously the mush speculated Core i7-1185G7 with 4 cores and 8 threads. It features a 3.0 GHz base clock speed and up to a whopping 4.8 GHz single-core turbo along with a handsome 4.3 GHz turbo for all of the cores. The L3 cache memory has been increased to 12 MB and it also features the much-awaited integrated Iris Xe Graphics with 96 Execution Units and up to 1350 MHz clock speeds.

The two Core i5-1135G7 and Core i7-1165G7 also have some pretty interesting specs which can help make upcoming mid-range laptops better as both of them feature Iris Xe Graphics as well. The entry-level options in the form of Core i3-1115G4 and Core i5-1125G4 look good too as they feature higher clock speeds and an improved Intel UHD Graphics.

This is the new Tiger Lake UP4 CPUs that will draw 7 W of power and can turbo to 15 W, previously named as the Y-series CPUs will get a huge bump in performance as well. These new low-power Tiger Lake CPUs draw less power yet can reach the 4 GHz mark. The UP4 lineup starts with the entry-level Core i3-1110G4 and features up to the Core i7-1180G7.

So, the alleged Core i7-1180G7 will be the flagship 7W CPU with up to a whopping 4.6 GHz single-core turbo along with a decent 3.7 GHz turbo for all of the cores. Also, the new Iris Xe Graphics that can give great graphical performance even on this fanless CPUs as well. There is an adequate number of Core i5 and Core i3 options in the lineup as well with much improved specs.

A lot of laptops will be announced with these CPUs and we will bring all the stuff here. As for now, the new Tiger Lake CPUs seem much more promising than before, only if Intel prices them right then the blue team can again convince their customers to go for their superior CPUs.