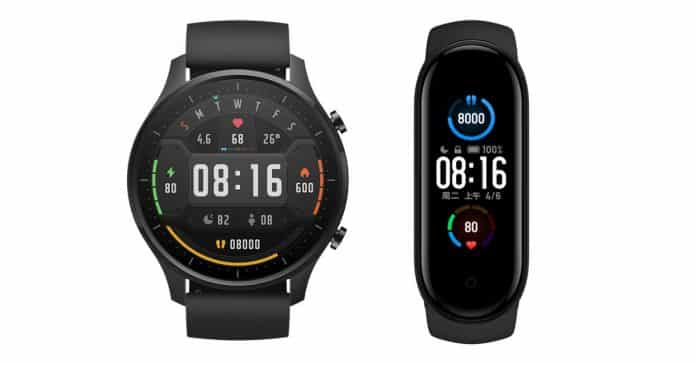 Xiaomi is prepared to launch its Mi Watch Revolve along with the latest Mi Band 5 in India. Let you know, the Mi Watch Revolve will be the first smartwatch from the company end launching in India, and its a rebranded version of the Mi Watch Color currently available in China. The Mi Band 5, on the other hand, will be the successor of Mi Band 4 which launched in June this year in China. Have a look at the expected specs and other details of both these products.

As it’s a rebranded version of the Mi Watch Color, we can easily guess what we will get. This watch will come with a 1.39-inch 454×454 AMOLED circular display. In the case of sensors and trackers, it may be equipped with a heart-rate monitoring system, sleep tracker, GPS, the latest Bluetooth 5.0, NFC, and more. On top of that, up to 5 ATM waterproofing for better safety and a 420mAh battery for up to 14 days of backup can be there. The leaks in the market are saying users will get two color options – Chrome Silver and Midnight Black. As the Mi Watch Color is priced RMB 599 which is nearly Rs.6,400, the Indian price actually can be somewhat around this too.

The successor of the Mi Band 4 is coming to India with a 1.1-inch touchscreen AMOLED display that is bigger than the earlier. The company adds 11 different sports modes including yoga and jump rope, personal activity intelligence facility, optional NFC, and more. The battery, inside, is capable of serving for up to 14 days long in a single charge. Multiple watch faces are there so that you can select a suitable one as per your style.

The Mi Band 5 has some special modes for women. These modes will help them to track their health as well as menstrual cycle.

Comparing to the Chinese price, we can expect that the price can be around Rs.2,000. Let’s wait for official announcements.