MediaTek’s Helio G95 makes its way to the market 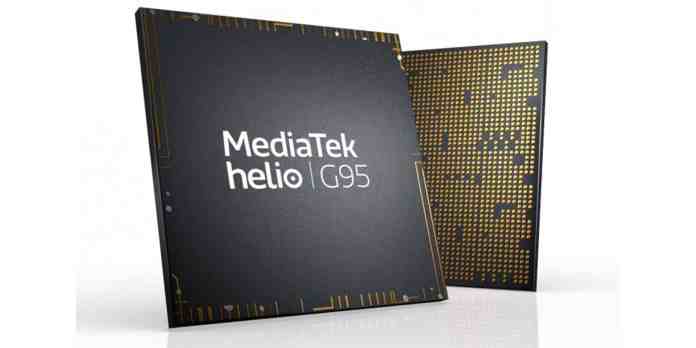 Taiwanese based chipset manufacturer MediaTek has today launched a new member of the G-Series chipsets group – the Helio G95. Said to be focused on empowering the gaming experience in 4G enabled smartphones, the G95 will presumably give a better graphics processing unit (GPU) performance as compared to its predecessor G90T.

The latest chipset will be making its debut with the Realme 7 series, expected to be making its way into the global market by the first week of September. Yenchi Lee, Deputy General Manager of Mediatek’s Wireless Business Communication Unit, was quoted as saying “MediaTek continues to enhance its G series gaming chips to deliver robust performance and MediaTek Helio G95 is our most powerful gaming chip to date”.

As can be seen from the infographic above, the most significant change to the Helio G95 is the improvement on the GPU which moves to a Mali-G76 MC4, which is clocked at 900 MHz giving the performance boost from the Mali-G57 MC4 that was clocked at only 800 MHz.

The connectivity, RAM, and CPU layout all look to be the same as the predecessor while the chipset also claims to support 4K 30 FPS video recordings and 64MP camera sensors technology. This probably comes forth as an appealing aspect to those wanting to shoot videos and capture quality pictures on their phones.

However, the strategy from MediaTek here seems to be clear and that is to make a statement with their entire line of G-series chipset and the new recruit only seems to be a more powerful edition to attract those gaming fanatics.

The rise of consumption in mobile games such as PUBG, Call Of Duty, and Clash Of Clans to name a few, only consolidates the fact that MediaTek wants to be across the premium, mid-tier, and lower-end gaming smartphones’ market and provide users with an all-round seamless experience.

It remains to be seen how the Realme 7 series’ phones perform, which could provide users with an initial impression of the Helio G95’s hands-on performance.

Southampton came into the game, looking for their first win of the season. And what better place to do it than their...
Read more
Football

The people at Counterpoint Research has done a great job to bring a new report that states a complete report on the...
Read more

Taiwan’s export makes a new record in August, thanks to its strong electronics shipments

The world had a tough time in the pandemic which is still ongoing and the lockdowns did have an impact on the...
Read more
Load more

Video wall style displays are often impressive and effective. They are 100 inches or wider diagonally and are used mostly in a...
Read more

This year IPL 2020 has finally returned after a long wait. Fans of the franchise have been looking for a way to...
Read more