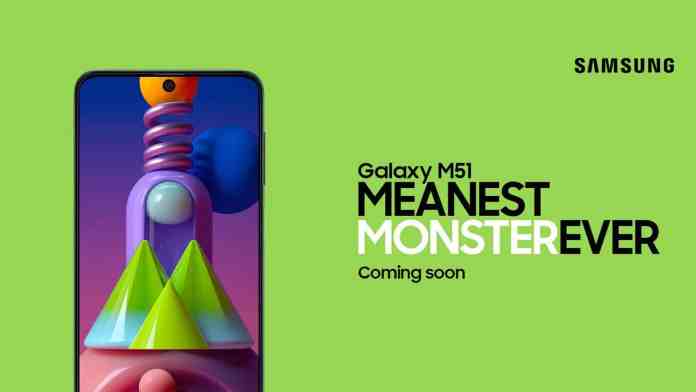 Now let’s talk about the specifications of this phone. The Samsung Galaxy M51 will run on Android 10 Os and will get powered by the Qualcomm Snapdragon 730 chipset. This phone has a 6.67-inch full-HD+ (1,080×2,340 pixels) Super AMOLED display with a 60Hz refresh rate. We can see a punch-hole display at the front side along with a quad-camera setup at the back of the phone. Interestingly this mid-range smartphone of the brand will come with an in-display fingerprint scanner or side-mounted fingerprint scanner.

Now let’s go for the camera specifications. The M51 has a rear quad-camera setup of 64MP primary sensor with f/1.8 aperture, the wide-angle sensor will be 12MP with an aperture of f/2.2. The other two sensors are the 5MP depth sensor (f/2.4) and the 5MP macro lens (f/2.4). This phone also has a 32MP selfie shooter at the front. That means the rear and front camera setup are quite pretty good and decent.

The Samsung Galaxy M51 has a very powerful battery of 7,000 mAH, which supports 25W fast charging. Though it is a fast charger, you will need more and more time to make this phone 100% charged for its huge battery. But once it is fully charged you can use it and just forget about your charge.

This phone also supports USB Type-C port, dual sim, 3.5mm headphone jack, and Bluetooth 5.0. NFC and FM are also there in this phone. This phone will be slightly heavier for some obvious reasons for a huge battery in it. Dimensions are expected 163x78x8.5mm and weight: 213 grams.

Multiple tablets have been launched in Indian this September by the likes of Apple, Samsung, and Lenovo. In case if the iPad...
Read more
Load more