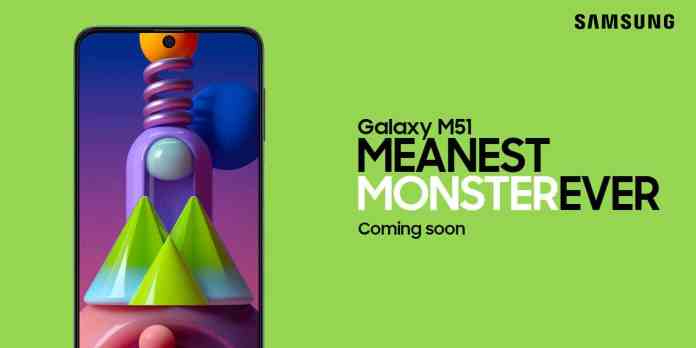 Samsung India has already teased the Galaxy M51 in its official twitter account and Amazon India has also created a landing page for the product launch revealing just the image of the phone. It will be an Amazon special smartphone and will be exclusively available via Amazon. The #MeanestMonsterEver used in the tweet indicates the rumored 7,000mAh battery of the phone. To make it clear to our viewers the Galaxy M51 will be the company’s first phone to have a massive 7,000mAh battery.

The phone has also been spotted recently in the Google Play console. The source claims that the phone will have 8GB RAM paired with Snapdragon 730 chipset. The phone will run on Android 10 and coming to the phone will support a FHD+ display. We can see punch hole display at the front side along with quad camera setup at the back of the phone. Interestingly this mid range smartphone of the brand will come with an indisplay fingerprint scanner or side mounted fingerprint scanner.

Keep your eyes on this link to get the latest updates for buying this phone: https://amzn.to/2ZP8RdI

In terms of camera specification we can expect, the primary camera will be of 64MP primary sensor with anf/1.8 lens. The wide-angle sensor will be 12MP with an f/2.2 aperture. The other two sensors are the 5MP depth sensor (f/2.4) and the 5MP macro lens (f/2.4). That means the rear camera setup is quite pretty good and decent. There will be a 32MP selfie shooter on the front side and it will be a hole-punch style of selfie camera.

In a previous article, we claimed that the South Korean giant Samsung is expected to launch the Samsung Galaxy Tab Active 3....
Read more
Load more