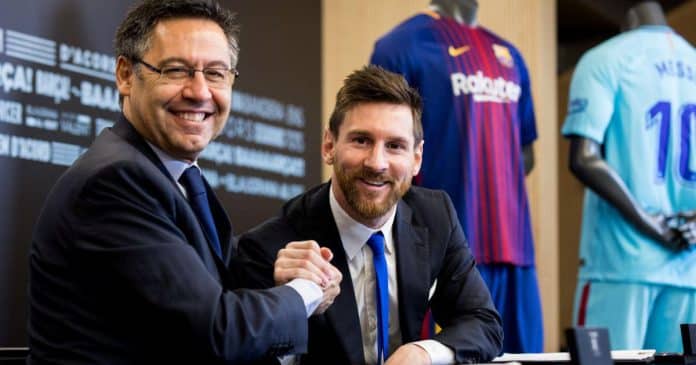 Josep Maria Bartomeu is a name that has raged every Barca fan out there, why? For him & his board the greatest player of this generation his favorite club where he has spent almost 20 years.

Now, the man has played another chess move against Messi, yes, its a war between the club and the Argentine which he has given up. This decision is not made up overtime, this has been coming through the wasteful decisions by the board for almost 5 years now.

The best player in the world has won just 1 Champions League title in 9 years, this says all the frustration in Messi that has led to this severe decision. When fans are bursting out their anger on social media and even protesting in Catalunya, the club president Bartomeu is making cunning moves to get rid of Messi. How? Let’s have a look at the new rumor:

He has “offered to resign”, well that’s a kind gesture of him, but, yes a “but” is there to this. Bartomeu will only resign if Messi says in public he will continue at Barca. This is a confirmed rumor which has some deeper meanings. Don’t you get it? Well, here is what this rumor actually stands:

Bartomeu will actually make this move because he wants to make his image clear before leaving the club in mess. He wants to show that he has left the club for the sake of Messi and make the Argentine look a villain and a dictator.

Bartomeu has anyway has his tenure over, if he sacrifices by this kind of approach not only he will make Messi responsible for this but also get a chance to again stand in the next presidential elections. Yes, this is a pre-planned chess move that Bartomeu is used to playing.

However, it seems Messi has given up this blame game and anyway wants to leave the club to win something at the ending days of his career. What do you think about this? Should Messi leave or do you feel Bartomeu is right? Tell us in the comments below…