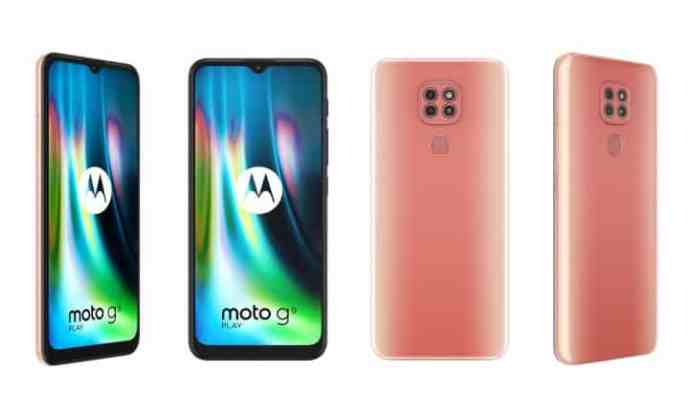 Moto G9 was launched yesterday in India and side by side it got its global variant with the name Moto G9 Play along with all identical specifications. The phone will be available in select markets of Europe and later on will be available in different regions. The phone is priced for €169 and will is available now to get your hands on. We can also expect a new colour variant Spring Pink along with Sapphire Blue and Forest Green.

Moto G9 comes with a 6.5-inch HD+ Max Vision TFT display with 87 percent screen-to-body ratio. The phone runs on Android 10 and features Snapdragon 662 processor paired with 4GB LPDDR4 RAM and 64GB of onboard storage that is expandable via microSD card (up to 512GB).

Coming to the cameras of the phone we can see triple-rear camera setup housed in a square camera layout design. It includes a 48MP primary sensor that has an f/1.7 lens and is based on a Quad Pixel technology, a 2MP depth sensor with an f/2.4 lens and a 2MP sensor with an f/2.4 macro lens. The front camera is an 8MP camera sensor housed in the drop notch on the top of the display.

Moto G9 is powered by a 5,000mAh battery and supports 20W fast charging. It weighs 200 grams, has a rear-mounted fingerprint scanner, and a Type-C charging port.

Moto G9 is priced in India at Rs.11,499 and the sale will start on 31st August at 12 PM in Flipkart. The phone is an budget smartphone from the company.

According to some of the recent reports, an upcoming smartphone from Motorola has received the TUV Rheinland certification. As of now,...
Read more

Motorola E7 Plus launched in India at INR 9,499

Finally, the wait is over as Motorola has launched another lower mid-range smartphone in the Indian market, named as Motorola E7...
Read more
Load more