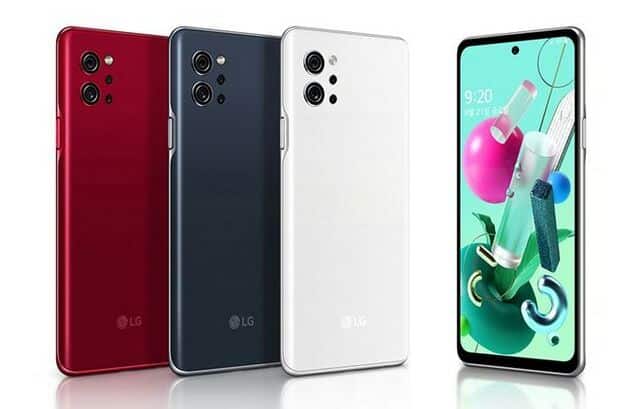 LG has officially launched another mid-range handset, LG Q92 in South Korea. Previously we got some clue of this phone and some specifications were also leaked by some sources. The LG Q92 has a quad camera with a unique setup in back and a hole-punch selfie camera display. LG Q92 offers a good battery life, good camera sensor, and huge storage capacity. The LG Q92 will be a good choice for mid-range smartphone users.

The price set for this phone is KRW 4,00,000 in South Korea, which will around Rs. 25,000 in the Indian market. LG also declared that the phone will go on sale on August 26 in the home market.

The phone comes with a quad rear camera with 48 MP primary shooter, 8 MP wide-angle lens, 5 MP depth sensor, and 2 MP macro sensor. The back camera setup is unique with two big sensors placed one below the other and other two small sensors sitting beside them. The phone has a punch-hole cutout placed at the top corner on the screen, which holds a selfie camera with a 32 MP lens.

The phone is powered by Qualcomm’s Snapdragon 765G SoC paired with 6GB RAM which is supported by 128GB of internal capacity. The LG Q92 has a battery life of 4,000 mAh with a charging speed of 15W. The phone boots LG’S UX 9 on the top of Android 10.

The phone is supported by a 5G network. The other connectivity options offer by LG Q92 are dual-band Wi-Fi, Bluetooth v5.0, NFC, and USB-C port. The phone also has Google lens support. LG Q92 offers 3 beautiful colour options for the buyers- White, Black, and Red. The phone is a more affordable version of LG Velvet 5G.

The gaming industry has become more profitable in this COVID pandemic era. With more people bending towards digital gaming, it has become...
Read more

LG reveals its smart TV portfolio for this pandemic year in India, there are multiple lineups having different screen sizes in each...
Read more

Recently, LG has launched its two new K-series smartphones. Most of the specifications are the same in those two new smartphones:...
Read more
Load more