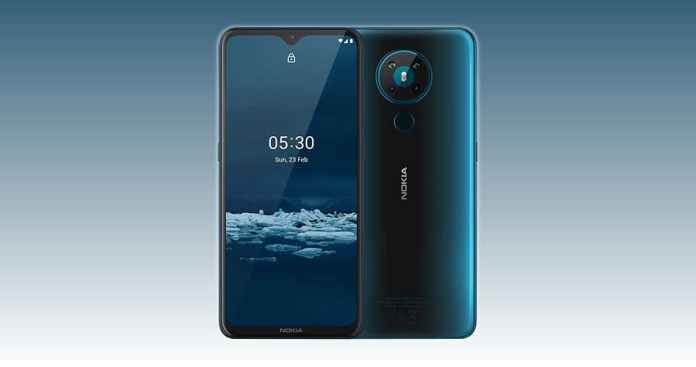 HMD Global is making a tremendous comeback in the market with their new Marvel-themed codename phone- Doctor Strange, maybe the phone will be added in upcoming ‘.4’ series of Nokia family with a trading name ‘Nokia 3.4’. This upcoming phone is spotted in Geekbench with some expected specifications.

Previously Nokia was launched ‘Nokia 2.4’ with the code name ‘Wolverine’. It is expected that the upcoming ‘Nokia 3.4’ will be the next member of their ‘.4’ series.

The image shows that the phone has a triple rear back camera with flash aligned in a round shape layout. The fingerprint sensor is also on the backside and this smartphone has a drop notch display with a glossy blue colour variant on back.

According to 91Mobiles, Nokia 3.4 has Qualcomm’s Snapdragon 460 processer with Android 10 out-of-the-box. They also claimed that this phone is coming with 3GB of RAM capacity. The phone is based on the Google Android One platform and users will get Android OS updates for at least two years. It is ensured by Android One that Nokia 3.4 will be the first phone to receive Google’s latest security updates.

Either way, with four Cortex-A73 based large cores, the Nokia 3.4 has bigger muscles than its 2.4 sibling, which has the aging Helio P22 chipset. It is assumed that Nokia 3.5 has more RAM too.

The sources reveal that Nokia 3.4 will be launched at IFA 2020 conference in Berlin in next month.

Nokia 7.3, Nokia 6.3 and Nokia 2.4 are in queue to launch very shortly. The most immediate phone coming from HMD Global is Nokia 5.3, which is expected to launch later this month. Nokia 5.3 is powered by Qualcomm Snapdragon 665 processor. This phone is available in 3GB, 4GB, and 6GB with internal support of 64GB which is extended by 512 GB by MicroSD card. The phone is powered by 4,000 mAh battery support.

A fantasy gaming app that was started merely over a year ago in the ever-growing world of fantasy sport, Playing11 has created...
Read more
Football

Reports had surfaced yesterday that Ousmane Dembele was on the verge of leaving Barcelona permanently. While that no longer seems to be...
Read more
Football