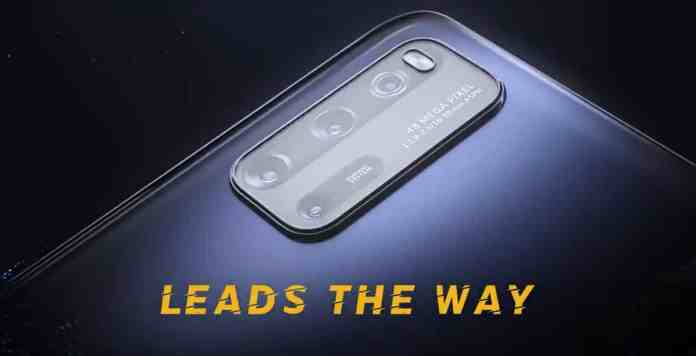 iQOO had already launched the iQOO 5 and iQOO 5 Pro in China a week ago. The company has also started teasing the launch of a new device in India. The vibe remains the same for this device but this time it is a new phone for India. In the latest video shared by the official twitter account of the company, the design and few specs information has been compromised.

Coming directly to the design, we will see a quad-camera setup housed in a rectangular camera layout along with other sensors and a flash at the back. The phone will come with a single-punch hole cut on the display at the right top corner. The main camera will be of 48MP (1:1.8-2.5/16-50mm) as shown at the mark 0:19. The power button can also pair with a fingerprint scanner. The phone will have a Type-C charging port at the bottom along with the speaker grills.

No more information can be decoded from the above video. But we will keep you updated with the most recent information about the smartphone. Recently we have seen that iQOO 5 series has launched in China, and so we thought that the same series will debut in India also, but it seems we are wrong after looking at this video. From the video, it seems that this phone will be a mid-range device from at least looking at the design and camera specs.

The iQOO 5 Pro has a one periscopic lens within the triple rear camera setup at the back, while it will also feature the 120W fast wired charging unlike the iQOO 5 vanilla version. The iQOO 5 Pro model is solely collaborated with BMW and it can be seen with a back finishes in carbon black and white leather with BMW’s blue and red accents colors.

iQOO will sell its Accessories in India separately from now on

iQOO is a relatively new brand in India, that is basically known for its premium quality smartphones. Though the price of...
Read more

After all the leaks and renders surfacing on the internet iQOO has finally released the iQOO 5 series smartphones - iQOO...
Read more

iQOO 5 series will launch on August 17 or today. Until now the company has not revealed the details about the...
Read more
Load more