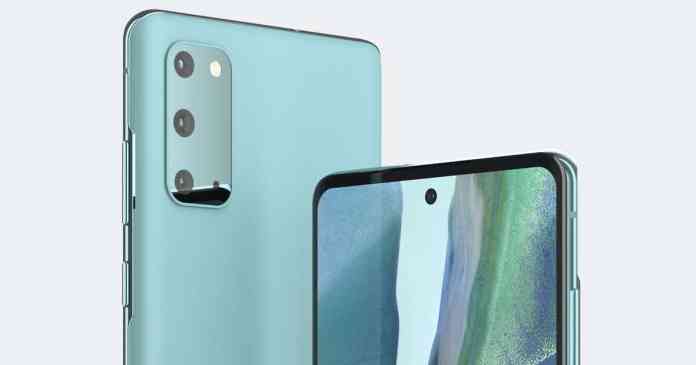 A few days ago @evleaks had shared renders of Samsung Galaxy S20 FE revealing six different colour options of the phone. We are not sure if the company would launch the S20 FE in all the colours or not. Yesterday the leaks had again shared two spin animations of the Samsung Galaxy S20 FE in two different colour options which shows its 360-degree video.

From this spin animation, we can see a closer look at the flagship smartphone. The animation shows a triple-rear camera setup along with flash. Now coming to the side we see both volume rockers and the power button at the left side while there is center aligned punch-hole cut on the display. The phone has a slim bezel on all sides. It does not has any curved screen like the Galaxy S20 Plus, but has a flat-screen.

According to the leaked image of the phone at different angles, it is predicted that the screen size is between 6.4 & 6.5 inches, it falls between the Galaxy S20(6.2”) and the S20+(6.7”). It is guessed to have a display with Full HD+ resolution & a refresh rate with 120Hz. Most probably, the phone will be launched with IP68 dust & water resistance.

In this phone, the user gets a triple camera setup with a 12MP primary camera, 12MP Ultrawide & 8MP telephoto units. The selfie camera is in a centered punch hole.

This smartphone is expected to have a huge battery capacity of 4500mAh, which is as same as Galaxy S20+. Based on an article of Gsmarena, this phone has a power button & volume controller on its right side. The phone has a USB-C port set at the bottom.