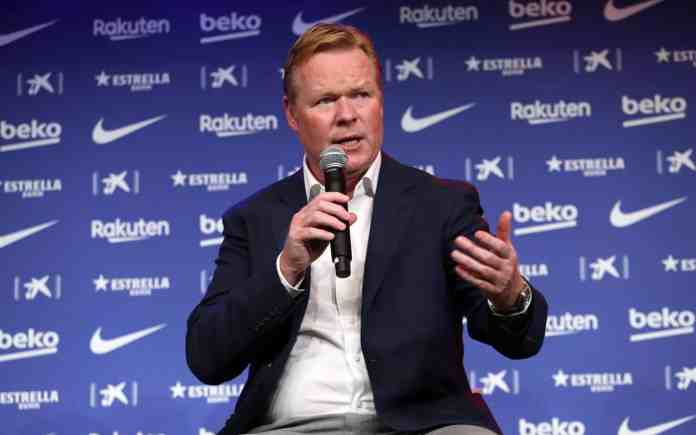 The newly-appointed Dutch coach has his intentions clear at Barcelona and wants to succeed at the Camp Nou as a manager, however, the situations are quite bad at Barcelona this time – Messi is broken down, Bartomeu is still the president, new technical secretary, old players at the club eating up wages, financial instability and more problems to solve than actually make.

In this kind of scenario, using youth players and making new signings can help Barca a lot but you have to balance the wage bills by bidding farewell to some of the senior players, and Bartomeu has indirectly pointed them as well. In an interview with the Dutch channel ‘Zigoo TV,’ he did give some more details of his new plans as a coach.

As MD points out, Koeman plans to make his project for Barça explaining the fact that he wants to keep Leo Messi as the key man. He has also made it clear that he only wants players “who want to be here”, and we know the Dutchman is firm in his decisions, so it will be interesting to see how he changes the team and shape things up.

He is also aware of the limitations he will have due to the economic circumstances caused by the coronavirus pandemic, but he does not renounce having a competitive Barça. “The big clubs are suffering incredible losses, so it will not be very easy to get five, six new players right away,” Ronald commented in this interview with Zigoo TV.

Although he intends to bring new reinforcements to the club that will obviously have to be accompanied by several exits from the squad, Koeman has also made himself clear that he is committed to the people of the house.

“We will also include young people,” he said, with which he makes clear that the promising youth plyer like Riqui Puig, Ansu Fati, Trincao, or Pedri will be getting their opportunities to be important with the Dutch coach. However, the situation is very crucial for Barcelona and all eyes will be upon what’s coming in the days to come before the season starts.

Barcelona all set to announce the signing of Sergino Dest

After battling it out with Bayern in the transfer market, it seems Barcelona have finally managed to come out on top. As...
Read more

Young players are the most exciting part of football. From teenagers with potential to world-class performers on the pitch, the journey is...
Read more
Load more