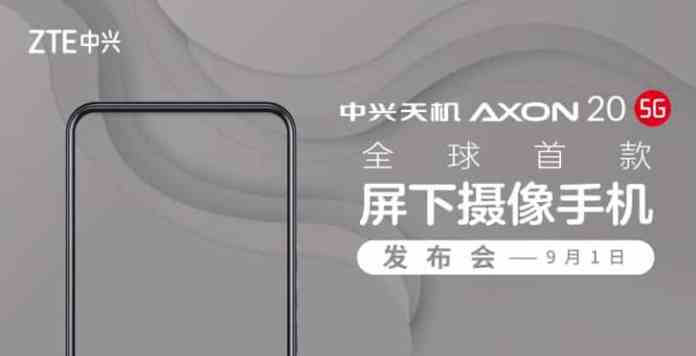 Ni Fei, president of ZTE mobile devices confirmed via Weibo their intention of launching the first under-display Smartphone. While many brands have been working on such technology, it appears ZTE might beat them to it. Now the company’s official page on Weibo has already mentioned that the phone will be called ZTE Axon 20 5G instead of the previous name spotted in TENAA which is ZTE A20 5G.

The ZTE A20 5G or as per the official name ZTE Axon 20 5G comes with model number ZTE A2121 and been spotted recently on TENAA. The website has also revealed some specifications of the phone as well as some original images. From the image, it does not hint any presence of the physical camera in the front which means that the under-display camera is really coming with this phone.

The main hurdle in such an under-display camera smartphone is the poor light transmittance through a screen. But it seems that ZTE has managed to circumvent this hurdle by using a panel developed by Visionox, one of the biggest OLED manufacturers in China. As per the intel of GSMArena, the company has already completed the R&D of the UD camera and the company says it works by optimizing the pixel arrangement around the camera’s lens.

According to TENAA, the phone will come with 6.92-inch (1,080×2,460 pixels) OLED display, quad rear camera setup including a 64MP primary sensor, an 8MP sensor, and two 2MP sensors along with a 32MP under-display front camera.

The phone will run on Android 10 along with an octa-core CPU with a frequency of 2.4GHz paired with 6GB, 8GB, and 12GB of RAM with 64GB, 128GB, and 256GB of storage. The exact combination is still not known yet. The phone is listed with a 4,120mAh battery but there is no mention of fast charging.

This year we have seen a lot of leaks about the upcoming technologies. But a recent leak has many tech enthusiasts running...
Read more
Cycling

So the sub ₹ 1,000 range is filled with loads of earphones but only a few ones are best so here...
Read more
Load more