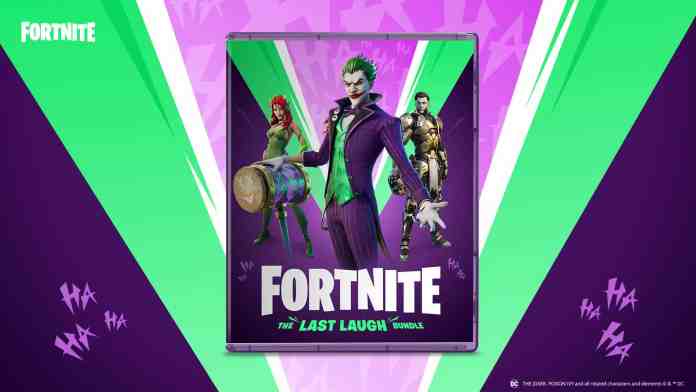 Epic Games has announced a new bundle called “The Last Laugh ” bundle for Fortnite, which is set to launch this November 17 for PlayStation 4, Xbox One, and Nintendo Switch. The bundle arrives with new skins and 1,000 V-Bucks.

If you play Fortnite in mobile or pc then the bundle will launch for you all soon as the company has stated that it will share further information for PC and mobile players in the near future. Furthermore, Epic has said the bundle will also arrive on time for the release of the PlayStation 5 and Xbox Series X.

Players of Fortnite who are big fans of the DC Universe will soon be able to play as Batman, Harley Quinn, and Catwoman skins in addition to The Joker and Poison Ivy, which have returned to the in-game Item Shop.

So, if you haven’t downloaded the game yet download it and enjoy the game as it is a free-to-play game available on Epic Games Store, Xbox Store, and PlayStation Store with Battle Royale and Multiplayer mode. For now Android and iOS will not be able to download it was recently removed from both the Google Play Store and the Apple App Store.

Previous year's Call of Duty: Modern Warfare reboot did not get a Zombies mode, but this year in August, Activision confirmed that the upcoming Call...
Read more
Gaming

The world of Destiny 2 persists to grow. It has greatly expanded for Xbox Game Pass Subscribers as both Destiny 2 Expansions- Forsaken, and...
Read more
Gaming

Yesterday, Epic Games made Rocket League free to claim for all of its users. Not only that, Epic will give you $10 to...
Read more

Do you want to claim Watch Dogs 2 and Football Manager 2020 for free?  If yes, hurry up, just login to your...
Read more
Load more

Call of Duty: Modern Warfare and the battle royale game Warzone Season 6 is now live for all the platforms. You...
Read more