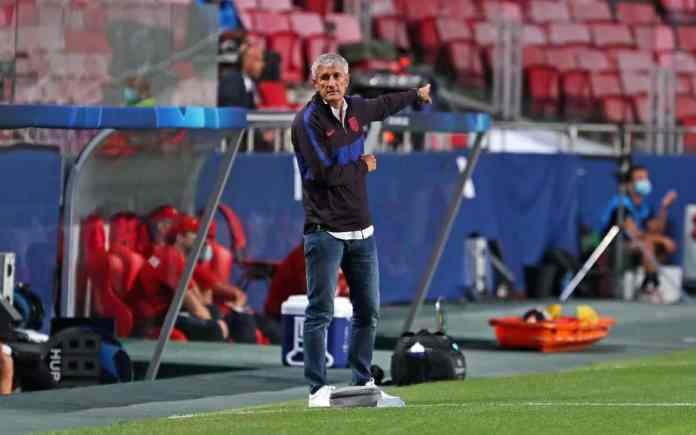 Indeed, yesterday’s massive defeat will not be forgotten by anyone as Barcelona was thrashed by Bayern with 8-2 score. Obviously, every Barca fan out there might be either angry or sobbing for a relentless defeat that has ended Barcelona’s UCL run. Bayern were obviously the favourites before the match and provided their form a defeat was expected for the Blaugranas but conceding 8 goals has made the loss shameful.

The once unbeatable Barcelona has been dominated, manipulated, thrashed out of the competition by a professional Bayern, which has become unstoppable this year. Bayern Munich plans to make this year’s campaign special as they have a chance to win the treble and provided their form along with a good & aggressive coaching staff nothing seems impossible for the Bundesliga giants.

Quique Setién did speak up after the humiliating game, who made ridiculous substitutions underestimated the Bayern side as well, obviously, it’s not only about the coach but also players, the board, everything needs a change. In his short speech Setién did admit his future is at stake even though he did not bid a farewell directly:

“I’m not going to get into that, because I’ve only been here six or eight months, but when a player like Piqué, who’s been in Barcelona all his life, makes a reflection of these, surely something will have for sure. Defeat hurts a lot, it is necessary that Barca regain its identity and surely we will have to change things. Now there is a huge frustration and all that remains is to draw conclusions and make the decisions that need to be made with the future in mind. Barca is such a big club that this does a lot of damage and I’m sure something will have to change.”

As per the ridiculous Barca board, they will first look someone to blame and the first change will be on the bench as Sport reckons Setién seems to have assumed it already: “Now everything is too hot to think about whether I’m going to continue or not. It’s not up to me. We must have a proper reflection, taking into account the situation and the importance that this humiliating and painful defeat entails for Barcelona. I have hurt this defeat so bulging in the way that has occurred. Not only do I worry about my future, because I already know the profession I’ve chosen, but how painful it is for the hobby and for the club.”

The Cantabrian ended with a note: “it is a tremendously painful defeat. We had started well, but we’ve been overwhelmed by its effectiveness. Bayern’s bluntness has outweighed us.”

The Barcelona club needs reforms totally, but will sacking the coach bring an end to this shameful defeat, and will this change the fact they the oldest squad with an average age of 30 has conceded 8 goals? There are a lot of frustrations among fans and everyone demands back the glory at the club, which time will only tell what actually happens in the coming days.