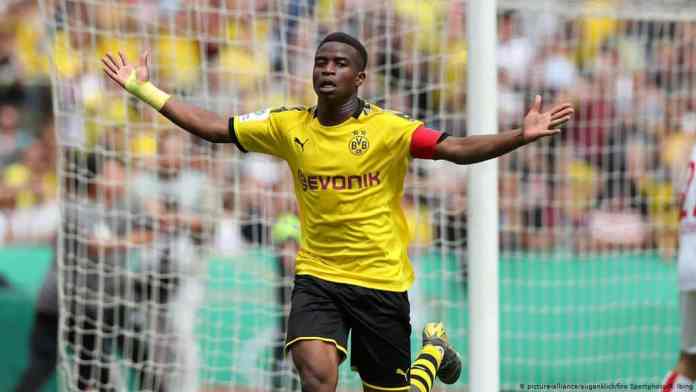 Borussia Dortmund has a rich history of developing talents. Their scouts spot all the emerging talents at a very young age and then develop them into world-class players.

From Robert Lewandowski to Ousmane Dembele, many players have been made into stars by Dortmund. Most of them sign for top European clubs, unlike Marco Reus who stayed loyal to Dortmund.

The recent examples of Borussia Dortmund’s talent reserve are Jadon Sancho and Erling Haaland. Jadon Sancho is wanted by a large number of top European clubs like Manchester United while Haaland has taken the world of football by storm. He has been their latest youth sensation.

Surprisingly, Haaland feels that Dortmund already has the next youth star in Youssoufa Moukoko. He is just 15-year-old but is already training with the first-team. He is expected to make his debut for Dortmund as soon as he turns 16 on 20th November.

Moukoko is a Dortmund youth academy player. He played three seasons at the youth level scoring goals at will. He achieved an unimaginable 40 goals with the Dortmund U-17s as a 12-year-old. He then had a 50-goal campaign the next season and a league-record 34 goals with the U-19s last season. There is a huge hype surrounding the player to succeed at the highest level.

Erling Haaland said Moukoko is way better than he was at 15 years. He said: “He’s a lot better than I was when I was 15. He trains at Borussia Dortmund and keeps up. I was in my home club, Bryne FK, when I was 15. You can’t compare that.”

“But it’s hard when he’s that good. I have never seen such a good 15-year-old in my life.”

Youssoufa Moukoko will wear the No 18 shirt for Dortmund’s first-team and is expected to make his debut very soon after 20th November.

Manchester United will make their ‘final Sancho bid’ next week

Manchester United has been monitoring Borussia Dortmund's Jadon Sancho throughout this transfer window. But they are reluctant to match the asking price...
Read more

Over the last few years, Dortmund have made a habit of finishing behind Bayern. However, things look different this season.
Read more