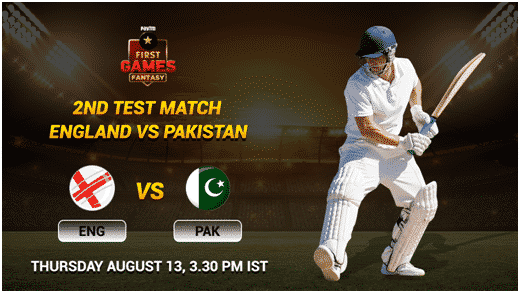 England will hit the ground more aggressively in the second test match after a thrilling win over Pakistan, but Pakistan also has the audacity to take the match in its favor with its swinging batsmen and aggressive bowlers.

England would like to get on with the same team except for their star player Ben Stokes who has been ruled out from the rest of the tournament. Pakistan would also like to try the experience of Wahab Riaz instead of fast-bowler Naseem Shah, who was not much successful in the first test match.

The second test of England and Pakistan starts on Thursday, August 13th at The Rose Bowl, Southampton.

With the rise of fantasy games, the true winner is always the fan. Our goal is to create a hub for Fantasy Sports fans, which would help users in covering a vast variety of factors and formats required for the matches. This would act as a one-stop – service for fantasy cricket audiences to understand data, statistics, and information for their needs.

The data and statistics covered above is for understanding purposes and is the hypothesis of how we believe the game would evolve. This may not be always correct and we recommend user discretion. Certain states in India do not allow online gaming and in the interest of our fans, we suggest having their respective local jurisdictional laws checked before playing fantasy games.