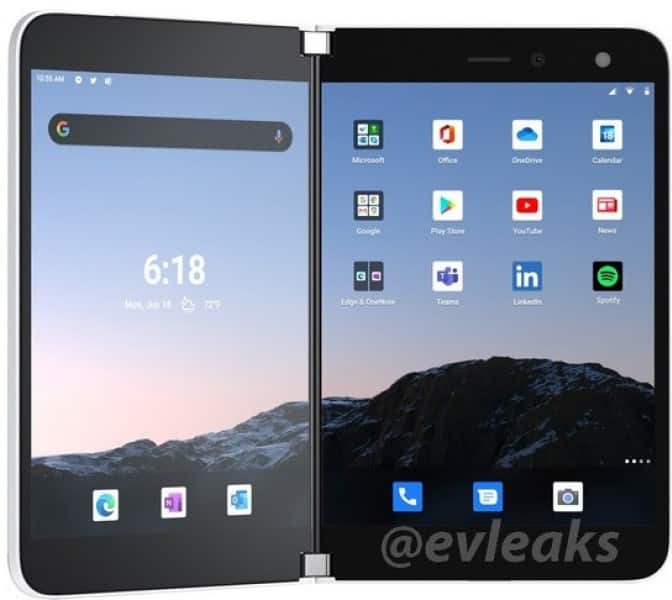 The leaked renders of Microsoft Surface Duo has appeared from a trusted source, Evleaks. These are a new set of renders and this device has been announced by Microsoft last year in October. After that a lot of renders have appeared revealing the design of the device and few specs.

These sets of renders have shown the opening of the Microsoft Surface Duo and there at the top front, we can see the Microsoft logo. This device will not have a continuous screen like the Galaxy Fold device but two separate screens combined in a device.

Inside the device you can see the google search widget and time widget. There are all the necessary Microsoft apps in the device. There is a single camera inside placed on the top bezel of the right screen and beside it we can see a sensor.

Previously we have also seen Microsoft Surface Duo will have a :app group”feature that will allow users to open more than one app at a time and work on them allover the screen at the same time.

The device was scheduled to launch in July this year but got delayed but Microsoft has reportedly invited its MVPs to attend a virtual briefing for the Surface Duo on August 12, meaning the Redmond-based tech giant could release the foldable smartphone this month.

Evleaks has also mentioned in his post that this is an AT&T model and there might be some minor changes in the final product. Though the allover design will remain same as reported.