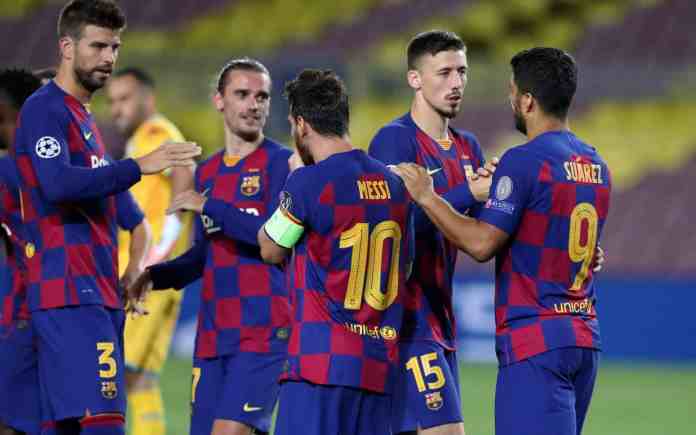 Barcelona hosted Napoli at the Camp Nou for the Champions League round of 16 second-leg tie. The score from the first-leg was 1-1 and everyone expected an evenly contested match.

But when you have a magician like Lionel Messi in your team, no club can match your level irrespective of how defensively good they are. Messi magic was in full flow in the first half of the match. Messi was almost everywhere on the pitch.

Messi scored an almost impossible second goal for Barcelona. He dribbled past two defenders and somehow got the ball back in the penalty area. Despite being horribly off balance (for a normal player cause Messi can literally fall down and score a screamer), Messi fired the ball low into the net while falling down. It was a class act from the Argentine.

His next goal was ruled out for handball, but he cleverly won the penalty for Barca’s third goal of the night. He came from behind and took a heavy knock from Koulibaly but was successful in claiming a penalty which Suarez calmly converted into a goal.

Napoli was way better from the end of the first half as Insigne scored from the spot and Callejon was almost on the verge of adding another before the half-time whistle. They started the second half with full of energy and motivation but was finally beaten 3-1 by Messi’s brilliance.

It seems an 11-man team can’t do in 90 minutes what Lionel Messi alone can do in 20-30 minutes. That’s why he is considered the best player in the world.

Barcelona progressed to the ‘Final Eight’ tournament in Lisbon and on their way to the Champions League quarter-finals, they have beaten their own record.

The Blaugranas have reached the quarter-finals for a record 13th successive time. The last time they were knocked out of the Champions League before the quarter-finals was way back in the 2006-07 season when Premier League side Liverpool eliminated Frank Rijkaard’s Barcelona in the round of 16.

No other club in Europe has been able to put together a run of more than eight seasons in a row qualifying for the Champions League quarter-finals. Barcelona has a monopoly over this record and they are breaking their own record every season since the last 4 seasons.

Lionel Messi’s Barcelona will now face Robert Lewandowski’s Bayern Munich on Friday. And a good thing for all the Barcelona fans is that all the next rounds will be a single leg affair so they won’t have to play any second leg.

When Barcelona realise they don't have to play any more second legs in the Champions League… pic.twitter.com/6FkLn06JZF

The quarter-final will be a hugely exciting match featuring two of the best players in the world right now.

Lionel Messi was all set and determined to leave Barcelona this summer and in all probability reunite with Pep Guardiola at Manchester...
Read more