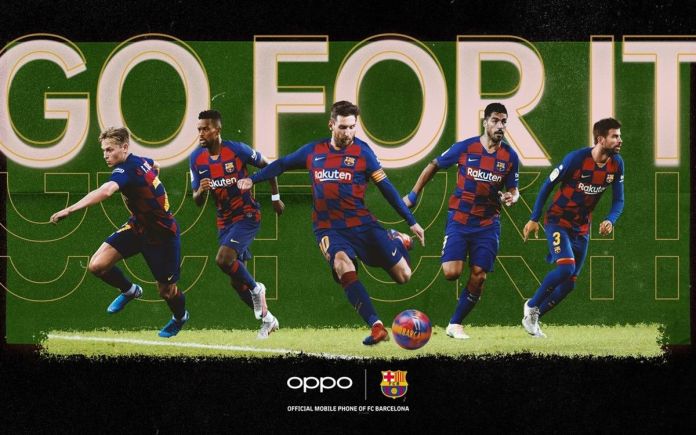 The Chinese mobile giant OPPO has been a big investor, when it comes to sport and one of its biggest partnerships is with FC Barcelona, being its official phone partner. OPPO is celebrating its 5-year long association with FC Barcelona with its new “Go for it” digital campaign that is meant for all Barça fans across the globe, especially it repuatation in Europe.

OPPO has been popular in Europe for quite sometime now and it wants to expand its market there, and partnering with the football giant FC Barcelona, launching new new campaigns does makes sense. Recently, OPPO has made its footprint in markets of Germany, Portugal, Belgium, and Romania, signifying how important the market is really to OPPO.

As part of this campaign, Barça players will be going in a one-on-one virtual Q&A sessions where Barça fans can watch them virtually through the OPPO Find X2. Here’s the club statement:

FC Barcelona and OPPO will launch a series of social content with the theme Go for it, including a social campaign collecting questions from Barça fans to be answered by Clément Lenglet and Nélson Semedo in a virtual Q&A session, and also exclusive content featuring Luis Suárez, Gerard Piqué and Martin Braithwaite.

This clearly specifies OPPO is trying to target the 5G smartphone market especially in Europe, keeping FC Barcelona its center of attraction and shooting videos on it, to promote its latest OPPO Find X2 Series. Already the Catalan giants have started this campaign and been promoting the #ShotonOPPO branding:

This clearly specifies OPPO’s strong partnership with FC Barcelona and how 5G is the future and keeping one of the biggest football club as the centre of attraction will help OPPO grow in Europe.

Also, FC Barcelona has topped to be the the most engaging sports brand in the world on the top three social networks. Know more here: