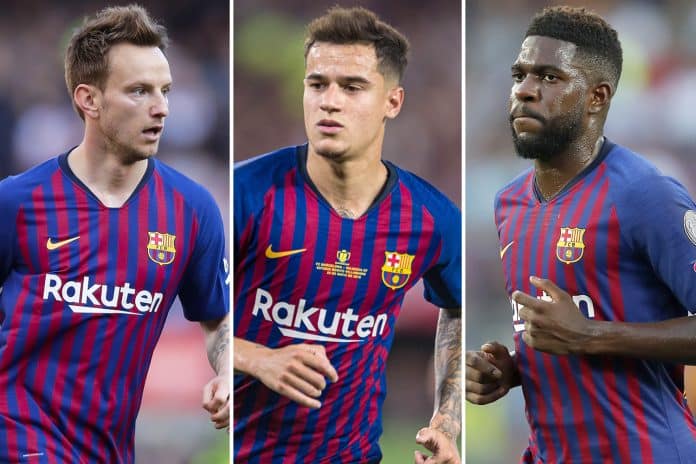 FC Barcelona is urgency of selling few players and we already knew the fact and it seems the club has transfer listed a dozen of players for this upcoming summer transfer window, according to Marca.

The Blaugranas want the cash for their upcoming target Lautaro Martinez but getting rid of so many players won’t be that much easy for Barcelona. Also, the club’s wages bill is the highest is the world so selling off few heavy weights can help to reduce that as well.

They have already made a deal with Juventus for swapping Arthur for Pjanic and so even before the Champions League campaign ends, the board wants to arrange the funds for the transfers.

There are a total of 12 players who are being treated as potential transfer deals to get in some funds into the club, among them, some are in Quique Setien’s plans in the first team, while there are players who are about to return from loan spells elsewhere.

Neto has not got enough this season because ter Stegan seemed fitter than usual while Semedo and Junior Firpo are being treated as the cash fundings as they are both potentially well-poised full-backs. Umtiti has lost his previous form after the World Cup injury and has not been able to impress for the last two seasons while Ivan Rakitic and Arturo Vidal are getting aged to stay in the Barca midfield.

Dembele has been unfortunate with his injury problems and is working hard to make a return in this Champions League and the emergency signing Danish international Martin Braithwaite is already been shown the exit door. Coming to the loanees, Alena is showing great potential at Betis including Rafinha and Jean-Clair Todibo, surprising to see all of them loaned out, but now they will be rushed to get some cash by the board.

While for Coutinho, the Brazilian has lost his sublime form, which he had in Liverpool, and has failed to impress the German giants as well which has made him a burden for Barcelona. But selling off both Coutinho and Dembele won’t be that easy for the Barcelona board but for Dembele if he shines at the Champions League still the board could consider his stay at the club.