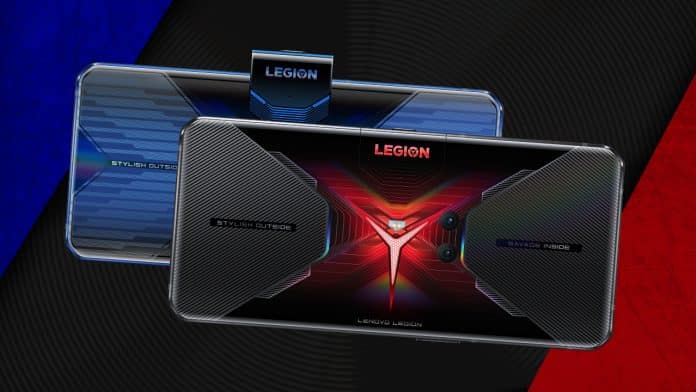 Lenovo Legion Duel (Legion Pro in China) is finally launched after a month of rumors and renders surfacing around the internet. We already knew how the smartphone will look like and now we also know the name of the smartphone as well. Lenovo has made the first-ever gaming smartphone to compete in the gaming smartphone market along with ASUS ROG, Xiaomi Black Shark, iQOO, Nubia Red Magic, etc. These are the top gaming smartphone series from well-known brands.

Now coming to the camera part, the phone comes with a dual-camera placed beside the Legion logo at the back of the smartphone which is almost at the center of the phone. The rear camera comprises a 64MP primary sensor with an f/1.89 lens, paired with a 16MP secondary sensor that has a 120-degree, f/2.2 ultra-wide-angle lens. There is also a 20MP selfie camera sensor that has an f/2.2 lens and is available on the side pop-up module. The side popup selfie camera will help streamers directly while playing games on their smartphone.

Lenovo Legion Duel has the best Snapdragon 865+ processor SoC, coupled with up to 16GB LPDDR5 RAM and 256GB and 512GB of UFS 3.1 storage options. The phone packs two 2,500mAh batteries that jointly power the phone with 5,000mAh typical capacity. The phone has a 90W Turbo Power Charging support that can charge 100% within 30 minutes.

Lenovo Legion Duel will be available in China with the name Lenovo Legion Pro later this month. The phone will be launching in “select markets” in Asia Pacific, Europe, Middle East, and Africa (EMEA), and Latin America in the coming times. There are no particular words on the launch of this phone in India.

Pricing in China goes as,

Previous articleTop 10 highest paid IPL cricketers in 2020
Next articleFrom doubters to believers: Liverpool release video before getting their hands on the Premier League trophy