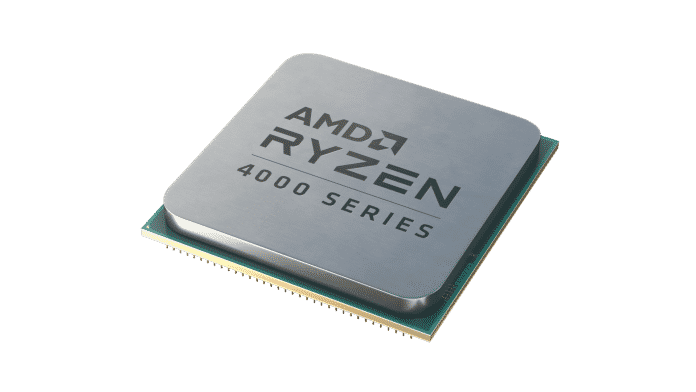 Finally, as expected, AMD has launched its Ryzen 4000 Renoir Desktop APUs which is the world’s first and most advanced 7nm x86 desktop processors with built-in graphics for consumer and commercial PC markets.

As per AMD, the AMD Ryzen 4000 Series Desktop Processors with Radeon Graphics feature the most advanced processor core technology on the market combined with the best graphics performance available in a desktop processor. These APUs promise to deliver good performance gains over last-gen and yes you can game pretty well at 1080p between low and medium settings with these processors with its strong iGPU.

It seems these exciting APUs will be restricted to pre-built systems from OEMs like Dell, HP, Lenovo and others. So, for making a custom PC these CPUs will not be available to purchase from the shelf, but, however, AMD has confirmed that these next-gen APUs will be coming for DIY users soon but no strong date is known as for now. So, you can expect various OEMs to unveil their AMD 3rd Gen Ryzen 4000 APU powered systems today.

Much expectedly, the new Ryzen 4000G desktop APUs borrow the similar platform as its mobile APUs launched at CES 2020. Obviously, the key differences between desktop and mobile will be the TDP and clock tuning helping to deliver a massive uplift in core counts and raw IPC.

These advanced APUs pack 7nm Zen 2 cores alongside the 7nm Vega graphics cores fused together to deliver incredible performance both for CPU and iGPU. We saw a major performance bump in mobile chips and so much expectedly, these desktop APUs at higher 65W TDP shall deliver better performance.

The AMD Ryzen 4000G is basically a monolithic Zen 2 die with support for eight lanes of PCIe Gen3 for the discrete GPU (if the OEM decides to include one). The monolithic design will deliver slightly better efficiency than chiplet offerings and also offer a marked improvement in latency & bandwidth numbers.

The maximum memory support remains the same as that of mobile Ryzen 4000 i.e. up to DDR4 3200MHz. Unlike last gen, this time you get 6 core and 8 core options as well with these APUs. According to Robert Hallock from AMD, each Vega CU on the Ryzen 4000 APU provides 59% higher performance and clock speeds are boosted too. There are also 35W variants in the ‘GE’ segment which we have listed below.

Unlike last-gen, there is the new king of the family i.e. the 8-core and 16 threaded Ryzen 7 4700G leading the family. It comes with 4 MB of L2 and 8 MB of L3 cache for a total of 12 MB cache. The APU features a base clock speed of 3.60 GHz and a boost clock speed of 4.45 GHz which exactly matches the earlier specs leaks.

The AMD Ryzen 3 4300G, the base APU on the other hand, now features 4 cores and 8 threads, along with clock speeds configured at 3.8 GHz base and 4.0 GHz boost. The APU comes with 4 MB of L3 cache and has a TDP of 65W. On the GPU front, it comes with Vega 6 integrated graphics that support 384 cores running at a clock speed of up to 1700 MHz.

AMD is also kind enough or proud to share some of the performance benchmarks of these APUs which clearly shows how these processors perform against its 9th Intel CPU rivals.

The quad-core AMD Ryzen 3 4300G is a powerful entry-level APU that gives huge gains in performance over the last-gen Ryzen 3 3200G. This new processor also performs very well against the likes of Core i3-9100 with integrated Intel graphics. AMD has also shown how capable this new APU is for various content creation workloads as well.