David de Gea: The journey from being the best in the world to not even the best at Manchester United 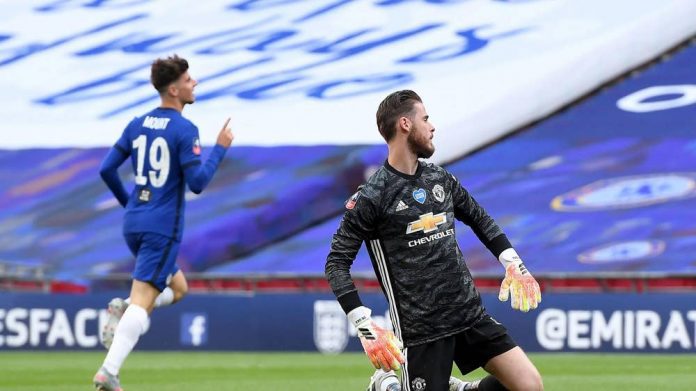 Manchester United faced Chelsea in the FA Cup semi-final on Sunday. Many would have thought Manchester are most likely to advance to the final.

But Lampard’s young team has done it again and in a more emphatic fashion by beating Manchester United 3-0. Not to take any credit from Chelsea but United goalkeeper David de Gea was at fault for the second goal and partially for the other two goals too.

Despite De Gea making regular mistakes, Solakjaer has always supported him and considered him the best in the world. But the statistics show the Spanish goalkeeper is not even the best at Manchester United.

Manchester United’s Dean Henderson, who is on loan at Sheffield United, has been outperforming De Gea on almost every meaningful goalkeeping statistic – clean sheets, save percentage, catches and sweeps.

During the 2017-18 campaign, David de Gea was deservedly the best goalkeeper in the world. He used to single-handedly bail out United in tough matches. But in the 2018 World Cup, he made basic mistakes against Cristiano Ronaldo’s Portugal.

From the 2018-19 season, De Gea’s effectiveness has started to decline to the extent of not even being the best at Old Trafford.

Football statistician @StatManCam has plotted a graph of De Gea’s decline since 2017-18 based on saves per expected goal difference. The 29-year-old has plummeted from over 12 saves more than expected to just 0.2.

💥 In 2017-18, David De Gea was the best goalkeeper in the world. The difference between the xG based on the shots he faced, and the total goals he conceded was a MASSIVE 12.4.

David de Gea is also one of the worst goalkeepers in the Premier League at sweeping and claiming crosses.

💥 Maguire is slow (main flaw) – this can be mitigated by having a sweeper GK covering space in behind.

💥 Lindelof is weak aerially – can be mitigated by a GK coming off their line and claiming crosses.

De Gea ranks amongst the worst in both aspects – see below. pic.twitter.com/KRa8Q8MfiU

The Spanish international has also failed to save any penalty in any competition since 2016/17, while Henderson has saved more than he has conceded since 2017/18.

Yesterday’s second goal is expected to be notched up by the statisticians as De Gea’s fourth error this season and eighth over the past two seasons. This is the worst record in the Premier League.

Even if Solakajer backs De Gea now, maybe it’s time to move past his past laurels and consider Henderson for the next season based on their present forms. Henderson is definitely above De Gea at the moment. You cannot keep making mistakes at the highest level and still expect to keep your place under the bars at a top European club like Manchester United.